The Administration has pointed to “spiraling” costs for the nation’s leading low-income housing program to justify radical changes in the program’s funding structure and the elimination of many key protections for low-income families. A Center report based on recent HUD data, however, finds that growth in program costs has leveled off since 2003. This suggests the program’s existing cost-control mechanisms have worked as intended.

The program, called the “Section 8” Housing Choice Voucher program, provides about two million low-income households with vouchers they can use to rent modest housing in the private market. Most recipients of vouchers are low-income senior citizens, people with disabilities, or working families. 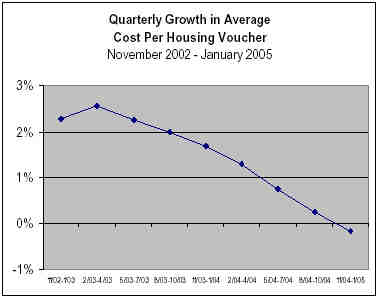 As the pie chart above shows, a little more than half (53 percent) of the spending growth in the Section 8 program from 1996 to 2003 reflected increases in the number of vouchers, while a third (33 percent) reflected the increases in per-voucher costs needed to keep pace with the widening gap between rents and incomes. (Section 8 consists of the voucher program and a separate “project-based” housing assistance program.) These pressures are not expected to return; this is the primary reason why the slowdown in Section 8 cost growth is expected to continue.

[1] CBO has not issued an updated version of this estimate since 2004.

Topics:
Housing
Stay up to date
Receive the latest news and reports from the Center