Average medical expenditures[1] per person are lower under public programs like Medicaid or the State Children’s Health Insurance Program (SCHIP) than under private insurance, according to new research published by Health Affairs.[2]

The new research, by Leighton Ku of George Washington University and Matthew Broaddus of the Center on Budget and Policy Priorities, is consistent with previous work by researchers at the Urban Institute.[3]  It suggests that enrolling uninsured low-income people in Medicaid should cost less than enrolling them in private insurance — and that expanding public programs like Medicaid would likely be a more cost-effective way to cover uninsured people with low or moderate incomes.

Key findings of the analysis, available on the Health Affairswebsite, include:

[1] Medical expenditures are defined as aggregate payments for health care services from all sources (including third-party insurance such as Medicaid and/or private insurance, as well as self-pay), but excluding health insurance premiums, if any.

[2] Leighton Ku and Matthew Broaddus, “Public and Private Insurance: Stacking Up the Costs,” Health Affairs (web exclusive), June 24, 2008, available at:  http://content.healthaffairs.org/cgi/content/abstract/hlthaff.27.4.w318 and from the authors upon request.  The research is based on 2005 data from the Medical Expenditure Panel Survey (MEPS), a national survey that collects detailed information about non-institutionalized individuals, including their demographic characteristics, health status, and use of health care.  The analysis examines those who were covered by Medicaid or SCHIP for the full 12 months of the year, covered by private insurance for the full year, or uninsured for the full year.

[4] Private insurance, as referred to in the new study, includes both employer-sponsored coverage and private coverage purchased in the individual health insurance market.

[5] Because children tend to be in good health overall, there was only modest variation in health status among children across health insurance categories. 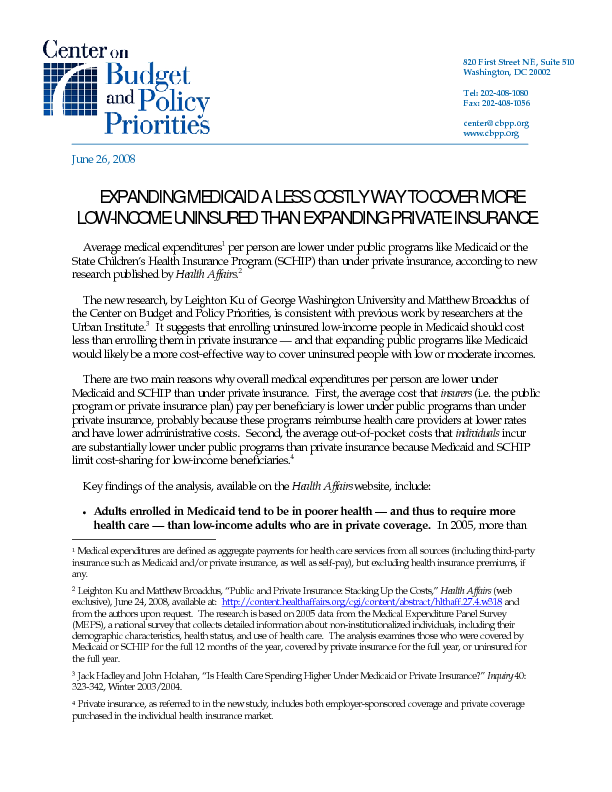