Repealing the estate tax would substantially reduce U.S. charitable giving, according to research by the Congressional Budget Office and various economists.  As CBO’s study explains, the estate tax creates powerful incentives for affluent individuals to donate to charity.  Since donations made both during life and at death reduce the size of an estate and thus the amount subject to the estate tax, the tax encourages both bequests at death and charitable contributions made during life.  Not surprisingly, both CBO’s study and other analyses have found that repeal of the estate tax would have a large negative impact on charities. 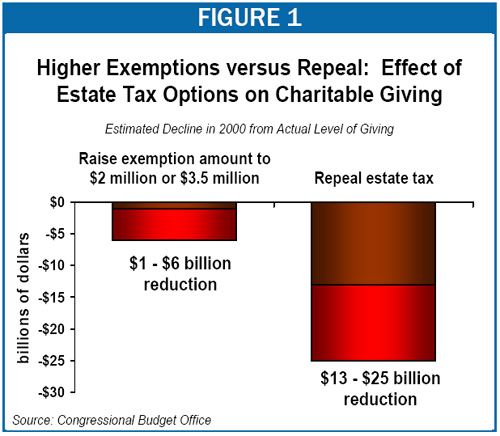 Based on this body of research, a report on the estate tax issued by the Urban Institute-Brookings Institution Tax Policy Center concluded that “repeal would be devastating” for charitable giving.

Estate tax proposals that would slash the tax rate — such as a proposal by Senator Jon Kyl that would reduce the rate to 15 percent —  would be almost as detrimental to charitable giving as repealing the estate tax altogether.  At the tax rates in effect through 2009, the estate tax serves as a strong incentive for giving because it makes charitable donations far cheaper than they otherwise would be.[3]  For example, if taxable assets are subject to the estate tax at a 45 percent rate, then a charitable donation of $100 costs only $55, because the other $45 would otherwise have been paid in estate tax.  In contrast, with a 15 percent estate tax rate, as proposed by Senator Kyl, a $100 donation would cost $85.  For this reason, economist William Gale has testified to the Senate Finance Committee that “reducing the top estate tax rate would have a significantly negative effect” on charitable giving.[4]

In contrast, the Congressional Budget Office found that reforming the estate tax by increasing the exemption level in effect in 2000 to as much as $3.5 million per individual ($7 million per couple) —  the exemption level that will exist under current law in 2009 — would have only a relatively modest impact on giving (see Figure 1).  Because the largest donations are generally made by the largest estates, exempting smaller estates from tax would reduce charitable giving by only a fraction of the amount that giving would be reduced by full repeal or by drastic reductions in the estate-tax rate.

[4] William Gale, “Charitable Giving and the Taxation of Estates,” Testimony Submitted to the United States Committee on Finance, September 13, 2005.