In March, the Congressional Budget Office issued new budget projections that show the federal government running a large cumulative deficit over the next ten years.[1]  As CBO acknowledges, however, its baseline projection is unrealistically optimistic, since it does not include the costs of continuing various policies, such as the recent tax cuts.[2]  Last month, the Center on Budget and Policy Priorities joined with the Committee for Economic Development, the Committee for a Responsible Federal Budget, and the Concord Coalition in reporting that omitted costs that are likely or virtually certain to be incurred equal about $2.6 trillion over the next ten years.  Adjusting the CBO baseline for such costs raises the deficit projection to $4.6 trillion over the next ten years.

This analysis provides more of the detail behind these joint estimates (and, in so doing, serves as an update of the “Mid-Term and Long-Term Deficit Projections” jointly released by the Center on Budget and Policy Priorities, the Committee for Economic Development, and the Concord Coalition in September 2003).  It also examines CBO data that shed light on the causes of the sharp fiscal deterioration of recent years.  These data indicate that, among actions policymakers have taken, tax cut explain fully half of the shift from surpluses to deficits.

Key findings of this analysis include: 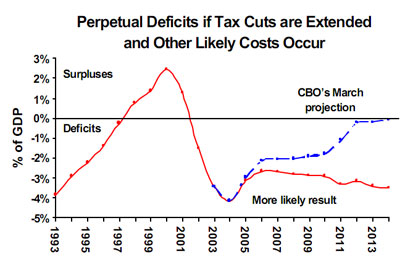 Tax Cuts Are an Important Way Policymakers Have Increased Deficits

In January 2001, CBO projections showed surpluses over the ten-year period from 2002 through 2011 totaling $5 trillion.  (This figure has been adjusted down from the official $5.6 trillion CBO 2001 estimate to include likely or inevitable costs that were left out at that time, thereby making the 2001 projection comparable methodologically to our current projections; see box on page 7.)  Our current estimate of this same ten-year period shows cumulative deficits of $3.9 trillion, for a total deterioration of $8.8 trillion over the ten-year period 2002 to 2011.  (This $3.9 trillion figure differs from the $4.6 trillion cumulative deficit discussed in the first two pages, because the latter figure covers the years 2005-2014.)

What caused a projected surplus of $5 trillion to become a projected deficit of $3.9 trillion?  Approximately 31 percent of this stunning $8.8 trillion deterioration is due to the tax cuts enacted over the past three years or assumed in this analysis, making tax cuts slightly more important than spending increases in explaining the shift from surpluses to deficits.  Another 30 percent of the deterioration is due to spending legislation, with more than two-thirds of the growth in spending representing increased costs for defense, homeland security, and the war on terrorism (and only one-twentieth of the new spending representing increased costs for domestic discretionary programs outside homeland security).  The remainder of the deterioration (the other 39 percent of it) stems from the view CBO now holds that the economic and technical underpinnings of its 2001 projection were too rosy.

The deficits we project — which will only grow larger when the baby boomers begin to retire at the end of the decade — pose a threat to the long-term health of the economy.  Persistent large deficits tend to reduce national saving, crowd out private investment, and slow economic growth.  In addition, former Treasury Secretary Robert Rubin and several economists recently warned that the projected long-term budget imbalances have become so large that they ultimately could lead to serious “financial and fiscal disarray” and cause a “fundamental shift in market expectations and a related loss of confidence at home and abroad.”[6]

Click here to read the full-text PDF of this report (18pp.).

[2] CBO, “The Budget and Economic Outlook:  Fiscal Years 2005 to 2014,” January 26, 2004.  In Table 1-3 of the January report, CBO provides estimates of the effects of policies that are not included in its official projections.

[3] Center on Budget and Policy Priorities, Committee for Economic Development, Committee for a Responsible Federal Budget, and Concord Coalition, “The Current Course: Deficits ‘As Far as the Eye Can See,’” April 20, 2004.

[4] In February, the Center on Budget and Policy Priorities issued an earlier version of this report in which we projected a cumulative deficit of $5.2 trillion for the 2005-2014 period.  We currently project lower deficits, but the improvement is entirely explained by the fact that, unlike in February’s report, we now assume that the bonus depreciation tax cut — which was enacted in 2002 and enlarged in 2003 and is scheduled to expire after 2004  — will not be extended.   The Administration did not propose extension of this provision in its FY 2005 Budget.  Nonetheless, some policymakers continue to advocate extension, and the fate of bonus depreciation remains unclear.  If this provision were extended, we would still project deficits of $5.2 trillion for the ten-year period from 2005-2014.

Methodology: The Current Course: Deficits As Far As the Eye Can See

April 21, 2004
Stay up to date
Receive the latest news and reports from the Center