Congress Has Not Favored the Food Stamp Program Over Farm Programs

That farm program costs have declined recently while food stamp expenditures have increased does not mean farm programs have been cut significantly or that the Food Stamp Program has been treated more favorably than farm programs.  Neither of those developments has occurred. 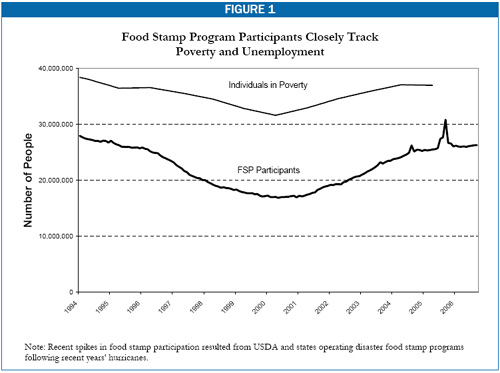 Thus, budget trends and recent legislative history do not support the argument that farm price support programs need more resources but the Food Stamp Program does not.  If expenditures for farm programs were to rise because of a drop in farm prices, no supporter of farm price supports would argue that the higher expenditures justified cutting these programs; similarly, the recent increase in food stamp expenditures resulting from growing need for the program does not justify cuts to the Food Stamp Program.

Moreover, the need for investments in food stamps remains high.  Census data show that 35 million Americans suffer from “food insecurity,” meaning they do not have regular access to enough food.  Food stamp benefit levels are low — they average about $1 per person per meal and, as noted above, are eroding further in value each year.  As a result, many households run out of food before the end of the month.

Also of note, despite some improvements since 2002, the Food Stamp Program reaches only about 60 percent of those who qualify for assistance, and only half of eligible working families.  And as a result of the 1996 law, some needy low-income Americans — such as many working-poor legal immigrant parents and some very poor, unemployed childless adults — are no longer eligible for food stamp assistance.  In addition, families with very modest amounts of savings are kept outside of the program because the program’s austere asset limits have been frozen for 21 years without any adjustment for inflation.  Congress should consider improvements in these areas as part of the 2007 Farm Bill.