Chart Book: The War on Poverty at 50, Section 3

Today’s Safety Net Cuts Poverty Nearly in Half, Provides Health Care to Millions, and Has Long-Term Benefits for Children

The safety net has developed over many decades and now helps millions of people make ends meet and access affordable health care.  Census data and new research show that the safety net today both keeps tens of millions of people above the poverty line and has positive longer-term impacts on children, including improved educational and employment outcomes.  Still, poverty in the United States remains high and many families face real hardships as they struggle to make ends meet.

Part I: Safety Net Cuts Poverty Nearly in Half

The safety net kept 41 million people out of poverty in 2012 — including 9 million children — under the federal government’s Supplemental Poverty Measure (SPM).  Unlike the official poverty measure, the SPM: 1) counts rather than ignores non-cash benefits, tax credits, and income and payroll taxes paid; 2) takes certain expenses such as child care into account when considering the income that a family has available to buy basics such as food, clothing, and shelter; and accounts for geographic differences in the cost of living.

CBPP analysis of federal Census data show that the SPM poverty rate would be 29.1 percent if no government assistance were taken into account.  But the poverty rate falls to 16 percent when such benefits are counted.  The safety net reduces poverty among people of all ages, including children.

SNAP (formerly food stamps) kept 4.9 million people — including 2.2 million children — out of poverty in 2012.  SNAP also cut the number of children with income below half the poverty line from 4.9 million to 3.5 million.

And, as noted at the end of this section, SNAP keeps more households with children out of “extreme poverty” — defined as having income of less than $2 per person per day — than any other government program.

Social Security lifted 26.6 million people out of poverty in 2012, using the SPM.  This includes 17 million seniors plus many younger people, including more than 1 million children.  Without their Social Security income, 55 percent of seniors would have been poor in 2012, a Census Bureau report shows; with Social Security, their poverty rate under the SPM is 15 percent. 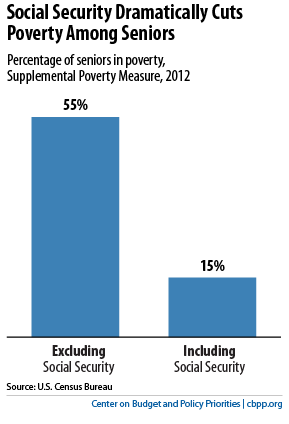 If Social Security did not exist, many elderly individuals likely would have saved somewhat more and worked somewhat longer, and many might live with their adult children rather than in their own households.  Studies confirm, however, that Social Security has made a very large contribution to reducing poverty.

Medicare and Medicaid, created in 1965, provide health coverage to millions of seniors, people with disabilities, parents, children, and starting in 2014 in states that adopt the Affordable Care Act’s Medicaid expansion, to poor childless adults as well.

In its early years, Medicaid was primarily limited to families receiving cash welfare benefits and some poor seniors and people with disabilities, but it has since expanded.  And health reform will extend Medicaid to adults with incomes up to 138 percent of the poverty line in states that elect to implement the new expansion.  Health reform also provides near-poor and moderate-income people with subsidies to buy private coverage through insurance marketplaces.

Over the past 15 years, expansions in Medicaid and the creation of the Children’s Health Insurance Program (CHIP) have further reduced the share of children who are uninsured.

Recent research has increasingly documented that programs such as SNAP and the EITC have longer-term positive impacts.

Among other things, children with access to food stamps were less likely in adulthood to have stunted growth, be diagnosed with heart disease, or be obese.  They also were more likely to graduate from high school.

Numerous studies have found that young children in low-income families do better in school if their families receive additional income from the EITC or similar supports.

For example, one study found that raising family income through refundable tax credits (primarily the EITC) makes it more likely that children in the family will attend college and have higher earnings as adults. The authors conclude that “a substantial fraction of the cost of tax credits may be offset by earnings gains in the long run.”

Another study found that children in low-income families that received an annual income boost of $3,000 (in 2005 dollars) between the children’s prenatal year and fifth birthday earned an average of 17 percent more as adults, and worked 135 hours more annually, than similar children whose families did not receive the added income.  The additional 135 hours of work is nearly a third of the gap in adult work hours between children raised in poor families and children raised in families with incomes exceeding twice the poverty line.

The EITC’s positive impacts aren’t limited to children; by helping “make work pay,” the credit also acts as a powerful work incentive for adults.  The EITC expansions enacted in the 1990s “appear to be the most important single factor in explaining why female family heads [of households] increased their employment over 1993-1999,” according to a well-regarded study.

Census data show that in 2011, nearly 1 in 5 American households struggled to meet one or more of nine measures of basic need or of avoiding serious financial difficulty.  These measures include difficulty in meeting essential expenses, not keeping up with monthly rent or mortgage payments, being evicted, not keeping up with utility payments, having utilities or phone service cut off, not seeing a doctor or dentist when needed, or not always having enough food.  The share of households experiencing several of these measures of serious financial difficulty worsened between 2005 and 2011, the Census data show.

Many poor children live in households struggling to meet basic needs and avoid material hardship.  A CBPP analysis of the Census data indicates that 58 percent of poor children lived in households that experienced at least one of four serious hardships:  “low food security” (i.e., problems affording adequate food), overcrowded housing, falling behind on rent or mortgage payments, or having utilities cut off.  Close to half of children in near-poor families faced such hardships, too, as the next chart shows.

This is especially troubling in light of growing evidence that young children whose families struggle to afford the basics may be exposed to high levels of stress that can hinder children’s healthy brain development and future academic achievement.

Part VII: Other Countries Do More Than the United States to Reduce Poverty

Many other wealthy countries’ poverty rates are similar to (or even higher than) the U.S. rate, before factoring in the impact of the safety net.  But these countries have lower poverty rates — sometimes much lower — after counting benefits from government programs.  This reflects the fact that nearly all of these other countries do more to fight poverty:  their programs are more generous, more accessible, and broader in scope than those in the United States.

The number of households with children that have income of $2 or less per person per day — one definition of poverty that the World Bank uses for developing nations — more than doubled between 1996 and 2011, to 1.6 million such households, according to a recent study.  The researchers found that a main cause of this increase was the changes in cash welfare programs in the wake of the 1996 welfare law, which made the program more work-focused but also much less accessible for many extremely poor families.  The researchers wrote that it was “obvious that cash assistance was having a substantial impact in reducing extreme poverty in early 1996, and having a much smaller effect in reducing extreme poverty by mid-2011.”

These findings are troubling.  The authors do also show, however, that SNAP cuts the number of households with children in extreme poverty nearly in half.  SNAP does more to alleviate extreme poverty than any other government program.