Chart Book: Deficit Reduction, the Economy, and the Budget Negotiations

The House and Senate, which passed starkly different ten-year budget plans this spring, have convened a conference committee that will likely focus on whether (and how) to replace some or all of the sequestration cuts in place for fiscal year 2014 and perhaps 2015, rather than on a broader long-term budget plan.

The 2011 Budget Control Act (BCA) set tight limits on discretionary (non-entitlement) funding through 2021 and called for additional annual cuts — known as sequestration — if Congress failed to agree on a deficit-reduction plan later in 2011.  The cuts are evenly divided between non-defense and defense programs, which will be cut by a combined $109 billion each year.  Most, but not all, of the cuts come from discretionary programs.  Though intended to be a “stick” that would force Congress to compromise on a deficit-reduction plan, these cuts have taken effect.

Part I: Deficits Have Fallen Significantly Since the Recovery Began

Policymakers have enacted several deficit-reduction measures since 2010, including cuts to appropriations in 2011, the 2011 Budget Control Act, and the American Taxpayer Relief Act (ATRA) in early 2013.  Taken together, these measures will shrink deficits by nearly $4 trillion over the 2014-2023 period, if the sequestration cuts remain in place or policymakers replace them with comparable deficit-reduction measures over the decade.

This nearly $4 trillion in deficit reduction reflects the impact of policy changes and the accompanying interest savings.  It doesn’t count the effects of an improving economy or the expiration of temporary stimulus measures.

Overall, with sequestration in place, 79 percent of the deficit reduction over 2014-2023 resulting from policy changes will come from spending cuts; 21 percent will come from increased revenues.  Even if we replaced half of the sequestration cuts in 2014 and beyond with added revenues, nearly two-thirds of the deficit reduction achieved over the 2014-2023 period would come from spending cuts.

Policymakers have cut NDD programs in three waves:  in the 2011 appropriations bills, then under the BCA funding caps, and finally through sequestration.  If sequestration remains in effect, NDD in 2014 will be 18 percent below its level in 2010, adjusting only for inflation.  (We use 2010 because it is the last year before Congress began cutting discretionary funding.) 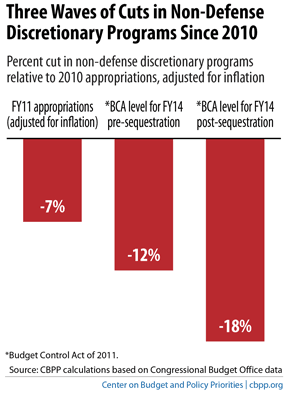 Sequestration Does Not Unduly Target Defense in 2014

Because of one-time changes that policymakers made in 2013, defense received more funding that year than originally called for under the BCA.  Thus, defense discretionary funding must fall by $20 billion between 2013 and 2014 to meet the sequestration target for 2014.  Those one-time changes did not help NDD funding, which in 2013 roughly equaled what the BCA originally called for under sequestration.  Thus, NDD does not have to fall further between 2013 and 2014 to meet the 2014 sequestration target; it will remain flat in nominal terms (and decline modestly in inflation-adjusted terms) if sequestration remains in place.

Regardless of the year-to-year changes between 2013 and 2014, NDD is cut more deeply than defense when one compares its 2014 funding level under sequestration to its 2010 funding level, adjusted for inflation.

Non-Defense Discretionary Spending Is Falling to Historically Low Levels, Even Without Sequestration

Some policymakers may seek to replace the sequestration cuts with harmful cuts to low-income entitlement programs.  The House-passed budget plan, authored by House Budget Committee Chairman Paul Ryan, secured nearly two-thirds of its $5 trillion in spending cuts over ten years from programs targeted on people of modest means.  Most of these cuts were to low-income entitlements, including SNAP and Medicaid.[1]

Both the House and Senate Farm Bills include cuts in nutrition assistance for low-income households, but the cuts in the House bill are far more damaging: $39.5 billion over the next decade, 98 percent of which would come directly from food assistance benefits.  The Senate-passed Farm Bill, by contrast, includes $4 billion in SNAP cuts, one-tenth the size of the cuts included in the House bill.

The House bill achieves most of its nearly $40 billion in cuts by terminating SNAP benefits entirely to certain groups, including ending benefits after three months for jobless adults without children who live in areas of high unemployment.  It also ends benefits for some low-income working families with high expenses for child care or housing and some low-income seniors.

Large-scale deficit-reduction packages enacted in 1990 and in 1993 and the smaller 1997 package adhered to the principle that deficit reduction should not increase poverty or hardship.  More recently, fiscal commission co-chairs Alan Simpson and Erskine Bowles reaffirmed this principle.

Part IV: The Weak Economy and the 2014 Budget Debate

The current budget negotiations occur against a backdrop of continued economic weakness.  Despite 43 consecutive months of private-sector job growth, unemployment — and long-term unemployment — remain high, and the share of the population with a job has improved only modestly since the depths of the recession. 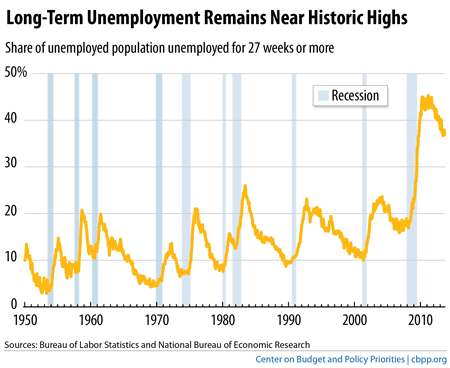 Sequestration is hampering economic growth and job creation.  According to the Congressional Budget Office, if policymakers had enacted legislation last summer to cancel the 2013 and 2014 sequestration cuts, the economy would have 900,000 more jobs — and GDP would be 0.7 percent larger — in the third quarter of next year than under current projections.

To be sure, we need, at a minimum, to stabilize the debt as a percentage of the economy over the longer term.  The best approach would be to replace sequestration with a package that contains sizeable alternative deficit-reduction measures — including both spending cuts and revenues — that take effect gradually as the economy and labor market strengthen, as well as temporary, upfront measures to boost job creation now.  Such a package could do more than sequestration to reduce deficits and stabilize the debt over the medium and long term, while encouraging economic growth in the near term.

Policymakers in both parties have called for scaling back tax expenditures to make the tax code more efficient and to generate savings.  Some, however, want to devote all of the savings to lowering tax rates, while others want to use some of the savings for deficit reduction, to ease sequestration, and/or to invest more in education and other building blocks of long-term economic growth.

Policymakers should use four criteria to evaluate proposals to replace sequestration: