CBO Finds the President’s Budget Would Increase Deficits by $1.6 Trillion Over Ten Years

The bulk of this increase in projected deficits was hidden in the President’s budget, because that budget only showed deficits through 2010.  Although it was clear to observers that the tax cuts proposed by the Administration would push deficits up after 2010, the CBO estimates show for the first time how large the increases in the deficit would be in the five years following the years shown in the President’s budget.

CBO’s analysis starts with its baseline projections of the deficits that would occur under current policies.  With funding for annually appropriated programs (so-called “discretionary” programs) assumed to remain at the 2005 level, adjusted only for inflation, and no changes in current laws governing entitlement programs or taxes, CBO projects that deficits will decline slowly over the next five years and then turn into modest surpluses beginning in 2012.  Much of the projected fiscal turnaround after 2010 stems from the increase in revenues that will occur when the tax cuts enacted in 2001 and 2003 expire at the end of 2010, as is scheduled under current law. 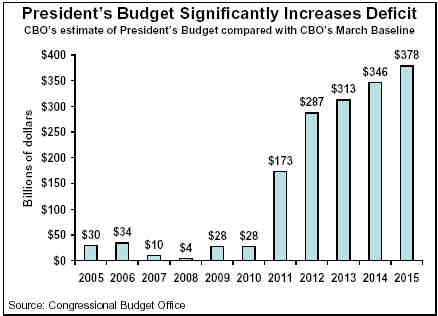 It is the President’s proposal to make the 2001 and 2003 tax cuts (which primarily benefited taxpayers with high incomes) permanent — and to add new tax cuts on top of them — that is principally responsible for the increases in deficits that CBO projects the budget would cause.  CBO estimates that the tax cuts proposed in the President’s budget would increase the deficit by more than $1.5 trillion in 2006 through 2015.[2]  These tax cuts, and a proposed $336 billion increase in defense expenditures, would more than offset proposed reductions in expenditures for nondefense programs (a proposed $412 billion reduction in expenditures for annually appropriated programs other than defense, and a proposed $103 billion reduction in entitlement programs other than refundable tax credits).[3]  Thus, the more than $500 billion in proposed cuts in nondefense programs would be used not to reduce the deficit but to offset a portion of the cost of the proposed tax cuts and defense spending increases.

It is certain that additional funding for Iraq and Afghanistan will be required, and the President and the Congress will not let the AMT affect more than 40 million taxpayers by the end of the decade, as will happen if there is no change in the AMT.  Since the Administration ignored these costs in its budget, CBO did not include them in its estimate of the budget.  Nor did CBO include the costs of the President’s proposal to establish a new system of private accounts as part Social Security reform, as the President did not include that proposal in the budget.  As a result, CBO’s estimate of the increases in the deficit that would occur under the Administration’s policies understates the increases that would occur when policies left out of the budget are taken into account.

[1] See the letter from CBO Director Douglas Holtz-Eakin to the chairmen and ranking members of the Senate and House appropriations committees: http://www.cbo.gov/showdoc.cfm?index=6137&sequence=0 .

[2] This includes outlays associated with refundable tax credits.  It does not include the added interest costs that would result from making the tax cuts permanent.  Including interest costs, the proposed tax cuts would increase deficits by $1.77 trillion over 10 years.