Supporters of extending the 2003 capital gains and dividend tax cuts argue that these tax breaks played a pivotal role in turning a lackluster economic recovery into a strong one. In particular, they point to the upswing in investment spending by business that occurred at about the time these tax cuts were enacted. Such claims, however, are based on a superficial review of the available evidence and paint a misleading picture of the short- and long-term effects of these tax cuts on the economy.

In reality, the current recovery is weaker than the average recovery in the post-World War II period, as assessed across a broad range of economic indicators. The economy has underperformed past recoveries in terms of GDP growth, and investment growth has been below historical norms. Fixed non-residential investment — investment in non-residential buildings, equipment, and software — has grown at an average annual rate of 3.8 percent during this recovery, as compared with an average 6.4 percent growth rate in past recoveries.

It is true that investment has increased since the second quarter of 2003, the time at which the capital gains and dividend tax cuts were enacted. But that is not a clear indication that these tax cuts caused the increase in investment spending. Indeed, as shown in the graph at right, investment also increased at the point in the early 1990s recovery that coincided with a significant tax increase. 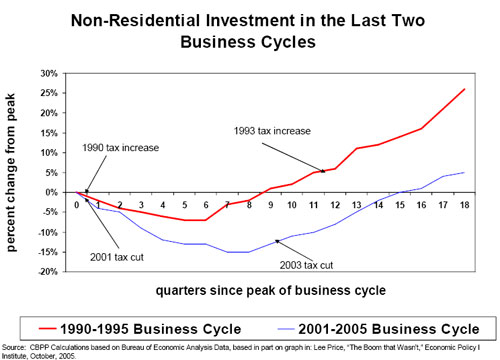 In reality, many factors affect the growth of investment, and conclusions drawn based on superficial correlations tend to be flawed. Already in February 2003, then-Federal Reserve Board Governor Ben Bernanke predicted “an increasingly robust economic recovery during this year and next” because of firms’ need to replace old capital, improvements in business cash flows, and diminishing uncertainty about geopolitical events. [1] Similarly, the Wall Street Journal’s January 2003 survey of economists found that most thought “a modest economic recovery should take firmer root in 2003, led by businesses expected to pour their recuperating profits into investment.”[2] Any of the factors named by Bernanke might have played a role in fueling stronger investment growth, as might the fact the oil prices fell and the Federal Reserve Board lowered interest rates to a 41-year low in the same quarter as the tax cuts.

Even in a best-case scenario, according to the Congressional Research Service, capital gains and dividend tax cuts would not be expected to contribute significantly to investment or GDP growth in the short run, since most of the benefits of those tax cuts would go to subsidize investments that would have been made anyway.[3] While the tax cuts could potentially make some positive contributions over the long run, the positive effects of these gains would be mitigated and likely outweighed by the tax cuts’ contribution to deficits. All else being equal, deficits reduce national savings and contribute to higher interest rates, which discourage investment. Deficit-financed investment tax breaks, therefore, have the potential to impede rather than encourage investment growth over the long term.

In the case of the 2003 tax cuts, a Congressional Research Service analysis concluded that, in the long run, “the dividend relief proposal wouldharm long-run growth as long as it is based on deficit finance” (emphasis added). [4] Similarly, Brookings Institution economists William Gale and Peter Orszag concluded that even if more optimistic assumptions about the positive effects of the dividend and capital gains tax cuts on the economy proved accurate, as long as these tax cuts continued to add to the deficit, “the net effects would be roughly a zero effect on long-term growth.”[5]

In the early 1990s, lawmakers increased taxes in large part because they were concerned about the effects of deficits on economic growth. Disregarding those concerns now and extending costly capital gains and dividend tax cuts would be more likely to harm the economy over the long term than to help it.