Congress Could Break Record For Longest Period Without an Increase

The minimum wage issue is heating up in Congress.  This Congressional attention is long overdue.    The federal minimum wage has remained at $5.15 an hour since September 1, 1997.  So for nearly nine years the value of the minimum wage has eroded due to the effects of inflation, and the wage standard has fallen further and further behind the wages of other workers.

This lack of Congressional action is approaching an unprecedented stretch.  Since the minimum wage was first established in 1938, Congress has typically acted to adjust its level upwards in a more timely fashion.  The one exception was in the 1980s, as the minimum wage remained unchanged from January 1981 until April 1990:  a period of nine years and three months.

This December 1st will mark nine years and three months since the last increase.  Thus, unless Congress acts quickly, so that a federal minimum wage increase is actually put into place before then, on December 2nd the federal minimum wage will have remained at the same level for the longest period since it was established

The lack of action on the minimum wage has led to a dramatic erosion in its value.

The decline in the value of the minimum wage is part and parcel of a disturbing feature of the recovery from the 2001 recession:  its failure to significantly improve the well-being of most workers.  Instead, the benefits of our impressive productivity growth rates have largely flowed to those at the top of the income and wealth scale.

These issues are discussed in somewhat more detail below.

Adjustments to the Wage Floor

The federal minimum wage has never included a feature by which it automatically increases each year to ensure that it maintains its purchasing power.  As a result, Congress has to act to provide such adjustments.

These adjustments have not always occurred in a timely fashion.  Nonetheless, from 1938 to1981, they did occur with enough regularity that the minimum wage generally either rose in purchasing power or remained relatively stable in real value.

Then, as noted, from January 1981 to April 1990 the value of the minimum wage was frozen at $3.35 an hour, the longest period without an adjustment in the wage floor.  As a result, the minimum wage eroded markedly in value.

The Current Value of the Minimum Wage

The federal minimum wage has often been set with the level of other workers in mind.  This approach reflects the principle that minimum-wage workers should share in economic gains and should not fall too far behind other workers

Raising the minimum wage would be one way to help reconnect the living standards of our lowest wage workers to the growth of the overall economy.  As has been widely noted, the benefits of the current recovery have failed to reach many workers.  Productivity is up sharply, but wages for low-wage workers (as well as for most other workers) have generally stagnated.

For example, for a worker whose wage is at the “10th percentile” (10 percent of workers earn less than this worker; 90 percent earn more), his or her wage level grew consistently in real terms from 1995 to 2002, rising by a total of 16 percent.[5]  But from 2002 to 2005, the 10th percentile wage fell by three percent after accounting for inflation, despite the fact that productivity growth is up 10 percent over these years.

Available evidence suggests that it is high-income workers and corporations that are benefiting most from the recovery.  For instance, corporate profits receive a larger share of national income than at any time in 39 years.[6]

Given these persistent imbalances, raising the minimum wage is one way to ensure that some small share of the economy’s growth reaches those toiling in the lowest wage jobs in our economy. 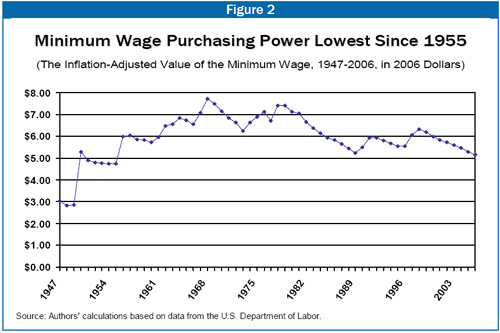 [1] Jared Bernstein is Director of the Living Standards program at the Economic Policy Institute.  Isaac Shapiro is an associate director at the Center on Budget and Policy Priorities.

[4] We adjust for inflation using the CPI-RS (research series).  The “RS” is a historically consistent series used by many analysts, including the US Bureau of the Census, to adjust for price changes.  Relative to the more commonly used CPI-U, the CPI-RS grows more slowly, meaning that the real minimum wage deflated by the CPI-U has a higher peak level: $9.09 in 1968 in today’s dollars.  Real values in this report are based on averaging the price index, January through May of this year.