Notwithstanding the overall positive impacts that the tax deal between President Obama and Republican leaders would have for the economy in the near term, its provision to encourage business investment in machinery and equipment would cost states over $11 billion in state corporate and individual income tax revenues during the current and next two state fiscal years.[1] This loss would come on top of states’ record revenue losses resulting from the economic downturn, which are creating budget shortfalls of unprecedented size. State shortfalls are likely to exceed $130 billion for state fiscal year 2012, which starts July 1, 2011 in most states.

Economists generally agree the tax cuts and unemployment insurance deal would increase economic activity and job creation in the near future, due primarily to its provisions to continue federal unemployment benefits and expansions in refundable tax credits and its payroll tax deduction. The increase in economic growth should result in some rise in state revenues, although it is difficult to know by exactly how much. Some states may be able to avoid revenue losses from the expensing provision by severing the link between their tax codes and the federal code with regard to this provision, an action known as “decoupling.” But, for states that do not decouple, the state revenue losses resulting from the expensing proposal will make it necessary to enact some mix of additional budget cuts and tax increases to offset those losses, and these budget cuts and tax increases will reduce whatever modest stimulative effect the expensing proposal otherwise might have.

Under the proposal, from September 8, 2010 to December 31, 2011, businesses would be allowed to immediately deduct from their gross income the entire cost of capital investments in machinery and equipment — a practice known as “expensing” — rather than gradually deducting or “depreciating” these costs over a period of several years.[2] In calendar year 2012, businesses would be allowed to deduct half of the cost of capital investments and then apply the regular depreciation schedule to the remaining value of the equipment. Because of linkages between the federal and state tax codes, this proposal would cost state governments significant amounts of revenue.

The economic downturn has caused state tax revenues to decline 12 percent below pre-recession levels. Meanwhile, the cost of providing services has risen, due both to normal population growth and to increased human need resulting from the recession (such as more people losing their jobs and employer-based health coverage and qualifying for Medicaid). The result has been large budget gaps in nearly every state.

After accounting for the federal fiscal relief provided through the 2009 Recovery Act and the August 2010 jobs legislation, states faced (and have mostly closed) budget gaps of $101 billion for the current state fiscal year. States are facing an even larger projected gap — $134 billion — for state fiscal year 2012; the gap will be larger in that year because the federal fiscal relief will have almost entirely expired. Preliminary data suggest that state budget shortfalls for 2013 also will approach or exceed $100 billion, assuming an economic recovery in line with what mainstream forecasters are expecting.

Because states must balance their budgets regardless of the state of the economy, they are closing these shortfalls with budget cuts and tax increases, both of which remove demand from the economy. As many economic analysts have noted, the drag on the recovery from such state actions is costing hundreds of thousands of jobs. Indeed, states and localities have cut 380,000 jobs since August 2008,[4] with ripple effects causing additional job losses in the private sector and making it more difficult for the economy to recover.

Forty-six states and the District of Columbia levy taxes on corporate and/or personal income where the definition of “income” is based in whole or in part on the definition in the federal Internal Revenue Code. In 24 states and the District of Columbia, this conformity is automatic — when the Internal Revenue Code is amended, tax codes in these states automatically change as well to reflect the federal changes. The other 22 states conform to federal definitions of allowable deductions, taxable income, and other items as of a particular date, but routinely update the conformity date each year to reflect the latest federal changes.

Recent history suggests that nearly all states with automatic conformity, and most states with conformity as of a specified date, will conform to the expensing proposal if it is enacted and will thus lose significant revenue.[5] Congress has enacted or expanded several types of business tax breaks over the past decade, including several rounds of expanded machinery and equipment write-offs (known as “bonus depreciation”) on a temporary basis and a “domestic production deduction” that allows deductions for a variety of activities ranging from manufacturing to film-making and publishing. Last year, Congress enacted a provision that allows corporations to postpone paying federal taxes on money gained from buying back their debt at a lower price, which is known as deferral of “cancellation of debt income.” Although two-thirds of the affected states chose not to conform to the first two rounds of federal action to allow bonus depreciation in 2001-2004, most did conform to the more recent rounds of business tax cuts in 2008 and 2009. In addition, 25 states at least partially conform to the domestic production deduction now, and nearly all now are conforming to the deferral of cancellation of debt income.

Just as most states have conformed to these recent federal business tax breaks, most are likely to conform to the expensing proposal if it becomes law. (The only major exception is California, which — alone among states — has long utilized depreciation rules of its own that differ from the federal rules; it is unlikely California would conform to the new expensing rules.) If the expensing proposal is enacted, economically significant corporations can be expected to bring considerable political pressure to bear on their state legislators and governors to conform state tax laws to the expanded federal deduction for equipment purchases.

The Joint Committee on Taxation estimates that this proposal would cost the U.S. Treasury approximately $110 billion. The Joint Committee on Taxation also estimates that the federal government would then recoup $89 billion of that amount later in the decade, because the immediate write-off of equipment costs would substitute for depreciation deductions that would otherwise have reduced tax payments in those later years.

States, too, would eventually recoup most of their revenue losses. But that would not help them over the next few years when they will remain in fiscal crisis, because they — unlike the federal government — must balance their budgets in all years, including those in which the economy is weakest. The revenue losses over the next few years would likely compel further cuts in state programs and/or additional state tax increases, which would reduce demand for goods and services and partly offset the stimulus resulting from the proposal.

[1] The Joint Committee on Taxation estimates an initial cost to the federal Treasury of about $110 billion, of which $89 billion would subsequently be recouped. Our state estimates also assume that at the federal and state levels, 75 percent of the revenue loss would occur in corporate income taxes and the remainder in personal income taxes. The estimates assume that each state loses the same percentage of personal and corporate income revenues as would be forgone at the federal level. State tax revenue data come from the Nelson A. Rockefeller Institute of Government, based largely on U.S. Census quarterly figures ( http://www.rockinst.org/pdf/government_finance/state_revenue_report/2010-10-19-SRR_81.pdf ) and the Census Bureau. Federal tax data come from the Congressional Budget Office.

[5] A few states that normally automatically conform to federal tax changes, such as Illinois, permanently decoupled from future bonus depreciation provisions and therefore will not be affected by the provision in the current tax package unless they take affirmative steps to conform. 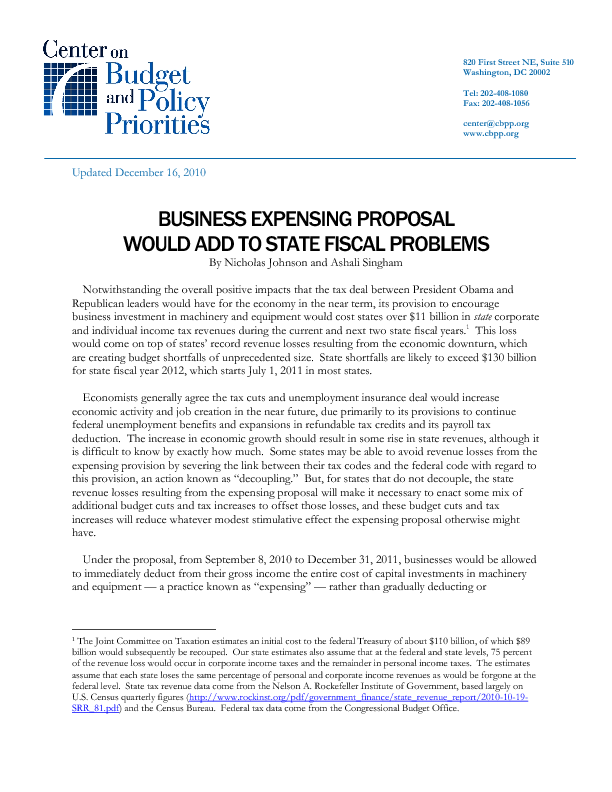