The United States can reduce greenhouse-gas emissions in a way that does not increase poverty or otherwise harm low-income households and is fiscally responsible.  As part of any global warming legislation, Congress should take steps to protect low- and moderate-income consumers.

Efficient, effective policies to reduce greenhouse-gas emissions work in part by putting a price on those emissions, thereby ending the free use of the atmosphere to dispose of pollution.  This raises prices for fossil-fuel energy products.  The higher prices operate as a market signal that encourages investment in energy efficiency and development of cleaner sources of energy.

Higher energy prices affect households with limited incomes the most.  They spend a larger share of their budgets on basic necessities like energy than better-off households do.  They also are less able to afford investments that can reduce their energy demand, such as a more efficient car or a new heating and cooling system.

Fortunately, well-designed climate-change policies can provide sufficient revenue to cushion the impact on vulnerable households and meet other legitimate public needs, such as expanded research on alternative energy sources.  A carbon tax can accomplish these goals.  So can a “cap-and-trade” system — as long as it treats the emission allowances as a resource to be auctioned off for public purposes rather than handed to energy companies free of charge.  In contrast, giving away the allowances (beyond the modest share it would take to offset energy companies’ added costs) would provide “windfall profits” for energy companies, according to the Congressional Budget Office, and would amount to “corporate welfare,” according to Greg Mankiw, the former chairman of President Bush’s Council of Economic Advisers.

If policymakers do not adequately protect vulnerable households from the increase in energy prices, many low-income Americans will slip into poverty and those who are already poor will grow poorer.  Alternatively, if policymakers address these and other public needs but do so through deficit spending because they fail to auction enough of the emission allowances to cover the costs, the federal budget deficit — already on course to reach unsustainable levels in future decades — will grow still larger.

Well-designed climate-change policies can avoid both of these outcomes.  In other words, they can slow global warming without increasing poverty and hardship among low-income households and without enlarging the deficit.

Protecting Those Most Vulnerable to Rising Energy Prices

Effective climate-change policies (whether a cap-and-trade system or a carbon tax) put a price on dumping greenhouse gases into the atmosphere.  Cap-and-trade policies directly limit the amount of carbon dioxide and other global-warming pollutants that power plants, factories, vehicles, and other sources may put into the air.  Carbon taxes limit that pollution indirectly by placing a price on each ton of emissions.

Both methods encourage energy efficiency and alternative energy sources.  Both also raise the costs of a wide array of products and services, from gasoline and electricity to food, mass transit, and other products or services with significant energy inputs.

That will pose special challenges for low- and moderate-income families, who pay a larger share of their budgets for energy-related costs than higher-income families.

For Low-Income Families, Added Costs Could Total $750 a Year

Poor and near-poor families will face the biggest challenges.  Unless climate-change legislation includes adequate measures to shield low-income families, even a modest 15 percent reduction in greenhouse-gas emissions would impose an estimated $750 a year in added costs, on average, on a family in the bottom 20 percent of the income spectrum.[i]  These households have average incomes only modestly over $13,000.

Moreover, those added costs would grow over time as the emissions-control targets become stricter.  Most climate-change bills before Congress would phase in increasingly aggressive targets over a number of years, a step that most environmental policy experts believe is necessary.

Climate-change initiatives will also create other important needs, including basic research on alternative energy sources and assisting workers and communities that depend on the coal industry and other industries most affected by the shift to a less carbon-intensive economy.  There is also interest in initiatives to train low-income workers for “green jobs” that promote energy efficiency.

In addition, the increase in prices for energy and energy-related products will drive up costs to the federal, state, and local governments of providing many important services and benefits (for instance, the Defense Department is the nation’s single largest consumer of energy).  Congress should offset those effects in order to avoid reductions in services or benefits, higher taxes, or an increase in already unsustainable federal budget deficits.

Effective climate-change policies can generate enough revenue to address these needs (see Figure 2). Under a cap-and-trade system, the revenues would come from the federal government’s auctioning the allowances that energy producers must hold to cover emissions that result from burning fossil fuels. 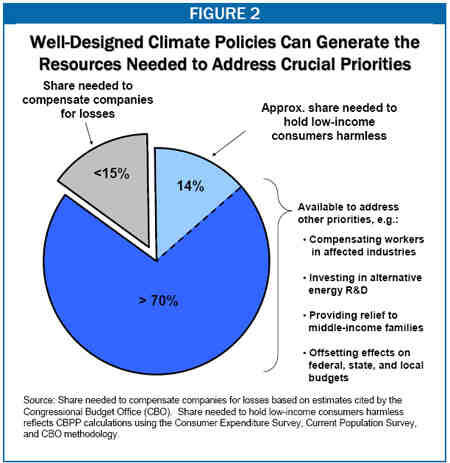 A cap-and-trade system could eventually generate $50 billion to $300 billion a year, depending on its design and the stringency of the caps, according to the nonpartisan Congressional Budget Office (CBO).  (A carbon tax that reduced greenhouse-gas emissions by comparable amounts would raise comparable amounts of revenue.)

This is certainly sufficient money to:  offset the effect of higher energy prices on vulnerable households; offset the effects of those price increases on federal, state, and local government budgets; assist the industries, workers, and communities affected by climate-change policies; and address other legitimate claims, such as promoting basic research on alternative energy sources.

But these resources won’t be available if the government gives away a large percentage of the emission allowances to energy producers free of charge.  This is a serious risk.  Many current cap-and-trade proposals, based in part on misconceptions about how a cap-and-trade system operates (see box), would do just that.

Arguments for Giving Away Emission Allowances Don’t Hold Up

The argument for giving away a large share of emission allowances for free, rather than auctioning them off, rests on two myths:

Myth #1:  Energy prices won’t rise if we give away the emission allowances.   To the contrary, the law of supply and demand explains why energy prices will rise — and by the same amount — whether energy companies have to buy allowances or get them for free.  A cap on emissions will limit the amount of energy produced from fossil fuels.  Regardless of whether the government gives away or sells the allowances, the supply of fossil-fuel energy will be restricted, and prices will rise to bring supply and demand back into line — just as the price of bananas would rise if there were a banana shortage.  Either way, energy companies will be able to charge what the market will bear and to sell their products at the higher price.*  This is why CBO has emphasized that energy companies will reap multi-billion-dollar windfall profits if they receive many of the allowances free of charge.

Myth #2:  Energy producers need most of the emission allowances to compensate for their losses.  Greenhouse-gas restrictions will affect energy companies’ profits and stock-market value by lowering the overall demand for their products.  But CBO estimates that, on the whole, companies’ net losses would amount to less than 15 percent of the total value of the emission allowances.  Thus, giving energy producers more than 15 percent of the allowances would over-compensate them for their potential losses and give them windfall profits.  Those windfall profits, in turn, would be highly regressive, boosting incomes among the (mostly high-income) shareholders of energy companies, even as lower-income households struggle to cope with higher energy bills.

Policymakers need to reserve only an estimated 14 percent of the total value of the emission allowances under a cap-and-trade system to protect low-income households from the effects of higher energy-related costs.

The Center on Budget and Policy Priorities has developed a proposal to provide “climate rebates” to low-income households in a way that would be effective and efficient, following these four basic principles:

The Center on Budget and Policy Priorities has developed more detailed policy options based on these principles.

[i] This estimate is based on data from the Consumer Expenditure Survey and methodology developed by the Congressional Budget Office, including CBO methods of estimating the costs to consumers from lowering allowable emissions.