The President’s 2012 budget proposes cutting funding for the Low Income Home Energy Assistance Program (LIHEAP) from the $5.1 billion enacted for 2010 to just $2.57 billion, a 50 percent reduction.  The Administration’s rationale is that Congress sharply increased LIHEAP funding for fiscal year 2009 in response to a substantial energy price spike in 2008, and that the proposed cut merely “returns LIHEAP funding to historic levels received for 2008 prior to the energy price spikes.”  As the following analysis shows, however, this rationale is unpersuasive in three respects.

Overview of LIHEAP and Its Funding

LIHEAP is a block grant that funds programs run by states, tribes, and territories to help low-income families pay their heating and cooling bills.  Federal guidelines state that households must have incomes at or below 150 percent of the poverty line or 60 percent of state median income (whichever is higher), but states can set lower limits.  States also determine who receives assistance out of the limited funding provided by the block grant.  In 2006, the year with the largest funding prior to 2009, about 34 million households were eligible under the federal guidelines but only about 5.5 million received heating or winter crisis assistance, while another half million received cooling assistance. [1] 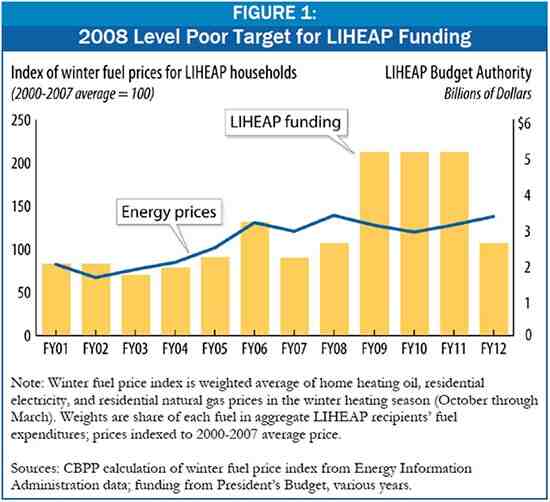 Figure 1 compares LIHEAP funding (budget authority) over the past decade to an index of home energy prices in the winter heating season (October through March).  CBPP constructed the index from Energy Department data and projections for home heating oil, residential electricity, and residential natural gas prices, weighted by each fuel’s share of total fuel expenditures among LIHEAP recipients.  The index measures the average price paid by LIHEAP recipients in each winter heating season relative to the average price of these fuels over the 2000-2007 period.

Figure 1 shows the relationship between LIHEAP funding and energy prices in the winter heating season.  It does not show the impact of the deteriorating economy and rising unemployment and poverty after 2008 on the number of households likely to need assistance, which we discuss further below.  The President’s budget proposes cutting fiscal year 2012 funding back to 2008 levels. [2]  That level of funding was inadequate in 2008 compared with the relationship between energy prices and funding in previous years; it will be even more inadequate in 2012 with energy prices rising and many more needy households.

Home Energy Prices on the Rise

Our analysis focuses on home energy prices in the winter heating season because the bulk of LIHEAP spending goes to home heating.  As Figure 1 shows, an index of these prices peaked in the 2007-2008 winter heating season (the first six months of fiscal year 2008).  Figure 2 provides more detail on the individual prices in the index shown in Figure 1. 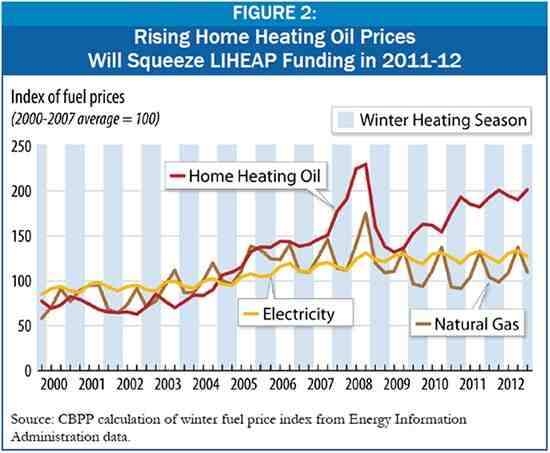 As Figure 2 shows, home heating oil prices spiked in the spring and summer of 2008, sharply increasing home energy prices.  It is understandable that Congress, which was deliberating LIHEAP funding levels for fiscal year 2009 while this spike was occurring, increased funding more than it otherwise might have.

The Administration’s proposed cut also fails to account for the rise in poverty since 2008.  In 2009, as the recession took hold, the number of poor persons rose by 3.7 million or 9 percent, by official estimates.  The annual unemployment rate leapt from 5.8 percent in 2008 to 9.3 percent in 2009.

If this relation between poverty rates and unemployment continues and the U.S. population continues to grow at nearly 1 percent annually, the number of Americans in poverty will be roughly 15 percent higher in 2012 than it was in 2008.  Some estimates are even higher:  a September 2010 Brookings analysis projected that the poverty rate could reach 15.3 percent in 2012, putting the number of poor Americans 20 percent higher than in 2008.

With home energy prices during the winter heating season as high as they were in 2008 and a population in need that is 15-20 percent higher, the President’s proposed LIHEAP funding level would serve a much lower percentage of households than were served prior to 2009.

If the Administration’s goal in cutting LIHEAP funding back to the 2008 level is to restore “normal” funding levels to a program that received a large increase in 2009-11, it has missed the mark.  Home energy prices in the fiscal year 2012 winter heating season are expected to be about the same as they were in the fiscal year 2008 winter heating season — not noticeably lower, as the Administration’s rationale for the cut implies.  In addition, the population in need of energy assistance will be considerably larger in 2012 than it was in 2008.  For all these reasons, establishing the 2008 funding level as the baseline for LIHEAP in 2012 will leave a higher percentage of the eligible population unserved or underserved than in 2008 or prior years.

[2] The House Republicans have proposed eliminating the LIHEAP Contingency Fund for the remainder of FY2011 — emergency funding to supplement regular LIHEAP block grants, especially to states with particularly high home energy assistance needs. The Administration proposal would reduce the funding available for state block grants in FY2012 but would leave the Contingency Fund at roughly the same level as in FY2010.