A State of Decline: What a TABOR Would Mean for Kansas

If a constitutional amendment to limit expenditures — similar to Colorado’s Taxpayer Bill of Rights (TABOR) — had been in place over the last decade in Kansas, state services would have deteriorated substantially. Had the TABOR limit most recently proposed by state Representative Brenda Landwehr (House Concurrent Resolution 5015) and the Americans for Prosperity Foundation taken effect in 1993, a cumulative total of $8.4 billion would have been cut from state expenditures for programs and services over the ensuing 12 years.

State General Revenue Fund expenditures in fiscal year 2005 could be no higher than $3.8 billion, had the Kansas TABOR limit begun in 1993.

This report illustrates the potential magnitude and impact of such a cut. It looks at reductions in programs and services in FY 2005 if a TABOR limit had been in effect since FY 1993, the same year Colorado’s TABOR was enacted. For sake of discussion, it assumes that total expenditures would be reduced to the permitted level by cutting all areas of state government expenditures proportionally. Thus if K-12 education makes up one-half of the budget, it would receive one-half of the expenditure reductions.

While actual reductions likely would differ from this assumption, proportional reductions provide an indication of the types of reductions that would be required (Figure 1). Lesser cuts in any one area would have to be offset with deeper cuts in another. (See box below.)

Reductions in state funding for K-12 education spending would have totaled $444 million in FY 2005. A reduction of this magnitude could have been accomplished in a number of ways.

State funding for Medicaid and the State Children’s Health Insurance Program (SCHIP) would have been $135 million lower in FY 2005. Expenditures could be cut by reducing the number of people eligible to be covered by Medicaid or by reducing the type of services that are covered under the program. For reductions of this magnitude, both approaches would be necessary.

Moreover, for every dollar from own-source resources that Kansas expends on services in Medicaid, the federal government contributes an additional $1.56. Thus a $135 million reduction in state expenditures would also trigger the loss of $227 million in federal matching funds, for a total $362 million reduction in total payments to hospitals, physicians, and other health care providers to provide services under Medicaid or SCHIP (HealthWave).

A $362 million reduction could have been accomplished by making all of the following cutbacks.

The Slow Squeeze of TABOR

This report shows the impact in FY 2005 of a TABOR that became effective in 1993. It looks over this long time period because the effects of a strict spending limit may take years to be felt fully.

Spending limits typically rise at a rate only modestly lower than the cost of providing services, perhaps a difference of one or two percentage points (Figure 2). Over time, however, the difference grows and compounds. A one- or two-percentage point difference every year can translate into a 13 to 26 percent gap over the course of a dozen years.

A state may react to the early years of a limitation by using accounting maneuvers and short-term deferrals. A state may push spending into future years, but that deferred spending can exacerbate the even tighter limits that lie ahead. A state may defer routine maintenance items, capital improvements, staff training, or other investments in infrastructure or workforce. Such changes may help balance the budget in the short run, but can be costly in the long run.

When public expenditures are investments, it may take many years for the harm from lack of investment to be evident. Much state spending is intended to have long-term impacts. Studies show, for instance, that early childhood spending has great benefits that do not begin to show up for many years. Infrastructure spending is another example. Failure to make expenditures now can have a negative effect on a state’s quality of life in future years. 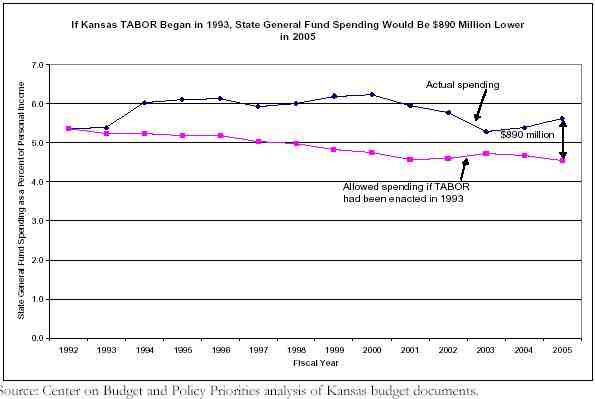 These policies would have serious repercussions for thousands of Kansas children, people with disabilities and mental health problems, and other low-income adults. In many cases, such cuts would make people’s health problems worse and require them to use more expensive care. For example, cutting home and community-based care would force many into nursing homes or other institutions that are more expensive and cutting prescription drug coverage would make many people sicker and push them into hospital or emergency room care. Our estimates are conservative and do not include such offsetting increases in Medicaid costs that might arise if TABOR was adopted. If such offsetting adjustments were included, even deeper cuts would be required to accommodate the restrictive TABOR limits.

State funding for correctional facilities would have been $25 million less than it actually was in fiscal year 2005. Cutting $25 million from the corrections budget would limit the state’s ability to follow current incarceration policies.

The service cuts detailed above in the areas of K-12, higher education, health care, and corrections would have achieved approximately $727 million of the $890 million in reductions required in FY 2005 if a TABOR had been effective since 1993. The other $163 million in cuts would have come from other areas of the budget, including agriculture, public safety, judicial, and youth service spending. To cut an additional $163 million from the budget, Kansas legislators could cut all state funding for the following.

The body of this report shows what would have happened if the cuts required by TABOR had been distributed proportionally across all areas of state government expenditures. For example, K-12 education makes up one-half of the state general fund budget, and thus would receive one-half of the required $890 million in expenditure reductions. Overall, every area of the budget would be cut by 19 percent.

Alternatively, Kansas policymakers might have chosen to protect funding for certain parts of the budget. In that case, other areas of the budget would have been cut much more deeply. Two alternative scenarios include holding K-12 funding harmless and holding K-12 and corrections funding harmless (Table 1). In the first alternative scenario, policymakers protect full funding for K-12 education, causing other areas to experience cuts of 38 percent.

In the second alternative, policymakers protect funding for K-12 education and corrections. In that case, all other areas would have to be cut by 40 percent.

The base used in this analysis — Kansas General Fund Expenditures — is similar to the base proposed in recent Kansas TABOR proposals. The TABOR proposals exclude federal funds from the base. Kansas general fund expenditures totaled $4.7 billion in fiscal year 2005.

The estimate of $362 million in reduced Medicaid services is derived from adding $135 million in state expenditure reductions to the product of $135 million times the Federal Medical Assistance Percentage (FMAP) for Medicaid or SCHIP. The FMAP, which is based on a state’s per capita income, determines the federal dollar match for each dollar of state expenditure. In Federal fiscal year 2005, the Medicaid FMAP for Kansas was 61.01 percent and the rate for SCHIP was 72.71 percent.

Estimates of staff reductions combine uniformed and non-unformed staff in the eight state correctional facilities. Uniformed employees comprise 71 percent of the total, so most of the employees cut would be front-line security personnel. Source: Kansas Department of Corrections, 2005 Corrections Briefing Report.

[1] Note that this example of a spending cut does not include any cuts to benefits for seniors and people with disabilities who are enrolled in Medicare. Under the new Medicare drug law, all Medicaid beneficiaries who are dually enrolled in Medicare will get prescription drug coverage under Medicare instead to Medicaid by January 2006. The state will be obligated to reimburse the federal government for a portion of the cost of covering those dual eligibles.