An Earned Income Tax Credit is a tax reduction and a wage supplement for low- and moderate-income working families. The federal government administers an EITC through the income tax. So do many states. States that enact EITCs can reduce child poverty, increase effective wages, and cut taxes for families struggling to make ends meet.

When the new EITCs are fully implemented, roughly one-third of recipients of the federal EITC will live in a state with an EITC. Annual state EITC benefits will exceed $1.5 billion.

Why Consider an EITC?

Over the last several years, several million welfare recipients have left welfare and become employed, most of them for low wages. Many other families have accepted the challenge of making ends meet on low-paying jobs without seeking public assistance. But a full-time job at the minimum wage often is not sufficient to lift a family out of poverty. Concern about low wages has led a number of states to raise their minimum wages, but even state minimum wages that are higher than the federal wage may fall short of providing a sufficient income on which to live.[2] State EITCs support families who enter and remain in the workforce.

Why Model a State Credit on the Federal EITC?

The federal EITC was established in 1975 to offset the effects of federal payroll taxes on low-income families. It has been expanded several times since, providing additional assistance to welfare recipients entering the workforce and other workers supporting their families on low wages.

The effectiveness of the federal EITC both in supporting work and in alleviating child poverty has been confirmed by a number of recent studies. 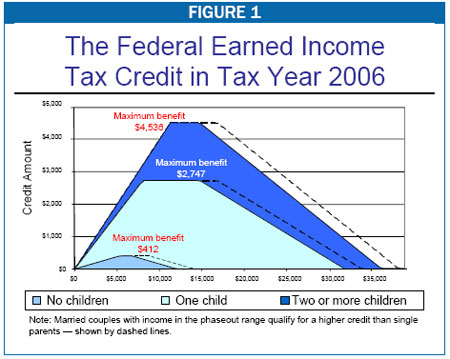 The maximum EITC benefits go to working families with incomes below the federal poverty line, but many families with incomes well above the poverty line benefit to at least some degree. (The 2006 federal poverty line is about $20,000 for a family of four.) This is because the EITC phases out gradually as income rises above $14,810 for single-parent families or $16,810 for married couples. Single-parent families with two or more children are eligible for some EITC benefit until income exceeds $36,348, while such families with one child remain eligible for some EITC benefit until income exceeds $32,001. For married couples, the maximum eligibility levels are $38,348 for two or more children and $34,001 for one child.

Sixteen of the 20 states with EITCs follow the federal practice of making the credit “refundable.” This means a family receives the full amount of its credit even if the credit amount is greater than the family’s state income tax liability. The amount by which the credit exceeds annual income taxes is paid as a refund. If a family has no income tax liability, the family receives the entire EITC as a refund. All low-income working families with children can participate in a refundable EITC.

The remaining four states — Delaware, Iowa, Maine, and Virginia — offer credits that are non-refundable. Such a credit is available only to the extent that it offsets a family’s state income tax. A non-refundable EITC can provide substantial tax relief to families with state income tax liability, but it provides no benefits to working families that have income too low to owe any income taxes. Thus a non-refundable credit assists somewhat fewer working-poor families with children and is likely to be less effective as a work incentive.

Another source of variation in the design of state credits is the treatment of low-income workers who do not have children living with them. Most states allow such workers to claim a state EITC (the exceptions are Maryland, New Jersey and Wisconsin), but because the federal credit for such workers is much smaller than for families with custodial children, the corresponding state credit typically is small as well. Beginning in 2006, one state — New York — is allowing such workers an enhanced, fully-refundable EITC, if they are non-custodial parents and if they remain current on their child support payments. The enhanced credit allows such parents to claim either (a) 20 percent of the federal EITC amount for which they would be eligible as the custodial parents of one qualifying child or (b) 250 percent of the federal EITC for which they are actually eligible as non-custodial parents. As a result, eligible non-custodial parents in New York may receive an EITC of up to $1,030 in 2006, substantially more than such parents can receive in other states.

Existing refundable state EITCs cost less than 1 percent of state tax revenues each year, though their dollar cost varies considerably from state to state because of differences in the size of state economies. (Vermont’s EITC costs about $17 million per year, while New York State’s costs about $680 million.) The cost of a state EITC depends principally on four factors: the number of families in a given state that claim the federal credit, the percentage of the federal credit at which the state credit is set, whether the credit is refundable or non-refundable, and how many state residents that receive the federal credit also learn about and claim the state credit. Because state EITCs are more specifically targeted to low- and moderate-income working families than many other major tax cuts, the cost may be relatively modest.

State EITCs are financed in whole or in part from funds available in a state’s general fund — the same funding source typically used for other types of tax cuts. When an EITC is used to offset the effects of a regressive tax increase, such as a sales tax increase, a part of the proceeds of the revenue increase may be set aside for the EITC. Current federal regulations also offer the opportunity to finance a portion of the cost of a refundable credit from a state’s share of the federal Temporary Assistance to Needy Families block grant. Most states have very limited availability of such funds, however, because the value of the TANF block grant has eroded over time and because states face costly new work requirements under the most recent federal budget law. No matter how it is financed, however, an EITC can complement a state’s welfare program by assisting low-income working families with children.

Further details on state EITCs and how they can help working families escape poverty are available in the following report from the Center on Budget and Policy Priorities: “A Hand Up: How State Earned Income Tax Credits Help Working Families Escape Poverty in 2006” by Ami Nagle and Nick Johnson. The report can be found at:

[1] One other state and one other city have offered EITCs in the past. The state of Colorado previously offered an EITC that was financed from required rebates under the state’s “TABOR” amendment. Those rebates, and hence the EITC, were suspended beginning in 2002 due to lack of funds and again in 2005 as a result of a voter-approved five-year suspension of TABOR. Under current law, the EITC is projected to resume in 2010. Separately, the city of Denver, Colorado piloted a local EITC beginning in 2002, which was financed from Temporary Assistance for Needy Families funds. In 2004, the program was suspended due to insufficient TANF funds.