Home / RESEARCH / A Brief Overview of...

A Brief Overview of the Major Flaws With Health Savings Accounts

Established under the 2003 Medicare drug legislation, Health Savings Accounts (HSAs) are individual accounts in which individuals who have a high-deductible health policy can save money to pay out-of-pocket health expenses.  In tax year 2006, any individual who enrolls in a health plan with a deductible of at least $1,050 for individual coverage and $2,100 for family coverage may establish an HSA.  Contributions to HSAs are tax deductible and may be placed in stocks, bonds, or other investment vehicles, with the earnings accruing on a tax-free basis.  Withdrawals from HSA also are tax exempt as long as they are used for out-of-pocket medical costs.

To encourage more people to open HSAs, the Administration is proposing substantial new HSA tax subsidies, such as providing a tax credit as well as a deduction for contributions to HSAs, making the premium costs for HSA-related health plans purchased in the individual market tax deductible (and providing refundable tax credits for them as well), and increasing the amount that can be deposited in a HSA each year to $5,250 for an individual and $10,500 for a couple or family.  In total, the Treasury estimates that the President’s proposals would cost $156 billion over ten years.

These proposals — and HSAs in general — suffer from several serious problems:

Problem #1:
HSAs would weaken the existing health insurance system and could actually increase the number of uninsured.

Problem #5
HSAs would significantly increase the federal budget deficit, especially in future decades when the nation already will be under fiscal strain.

Some 46 million Americans have no health insurance, and the health-care system is not delivering sufficiently high-quality, cost-effective care to many other Americans.  Health Savings Accounts do not address these challenges.  Instead, they would increase deficits while favoring healthy, affluent individuals and weakening existing sources of health insurance.

[1] According to CEA, “There were, however, some health benefits [from reduced cost sharing and greater health expenditures] for select subpopulations of low-income and chronically ill individuals, suggesting that care should be taken not to expose lower-income families to excessively high cost sharing relative to their income.”  CEA, Economic Report of the President 2006, p. 95. 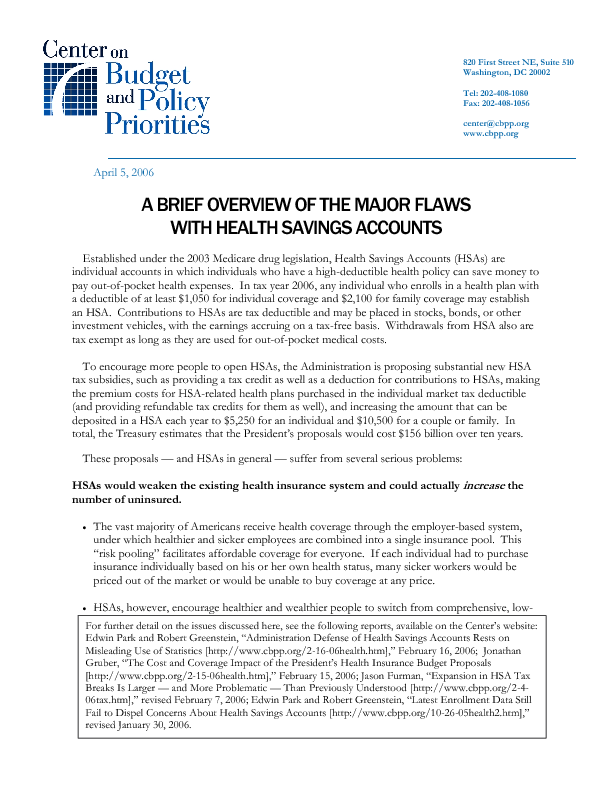