CBPP analyzed two Department of Housing and Urban Development (HUD) datasets, the Voucher Management System’s monthly reports and a non-public dataset from the Office of Policy Development and Research (available through a research agreement), to create the Housing Choice Voucher (HCV) factsheets. This non-public dataset contains demographic and location information on voucher recipients collected through HUD Form 50058. CBPP also estimated the unmet need for housing assistance among low-income households using the 2015 American Community Survey.  Unless otherwise noted, state numbers are rounded to the nearest hundred and national numbers are rounded to the nearest thousand.

Total people using vouchers: This is the total number of people living in households that were using a voucher as of December 2016, according to HUD administrative records.

Low-income households that pay too much for rent and do not receive any federal rental assistance: We used the 2015 American Community Survey (ACS) Public Use Microdata Sample and 2016 HUD administrative data to estimate this figure.  We define “paying too much for rent” as a household paying over 30 percent of its gross monthly income in rent and utilities, HUD’s definition of cost-burdened.  We used HUD’s definition of low income, defined as households whose cash income is 80 percent or less of Area Median Income (AMI).  We used HUD’s 2015 AMI limits by metropolitan area and county.

We first identified all households in the dataset that met HUD’s low-income criteria.  In order to assign households to their geographically appropriate AMI limit, we reweighted the ACS sample from Public-Use Microdata Sample Areas (PUMAs) into counties and metropolitan areas.  (The ACS uses PUMAs as the primary geographic unit.  PUMAs are non-overlapping areas that partition each state into areas containing about 100,000 residents.)  We developed a PUMA-to-county crosswalk weighted by the share of low- and moderate-income renters (household income less than $75,000) in the 2011-2015 ACS.  We used this crosswalk to generate geographical relationships between PUMAs and metropolitan areas and counties, allowing us to assign ACS household records to smaller levels of geography.  We then assigned a HUD income limit to each household based on its corresponding location and family size.

We then used existing variables in the ACS dataset to determine whether a household paid over 30 percent of its monthly income for housing.  We used the monthly gross rent variable to estimate each household’s monthly housing costs.  This variable includes the household’s monthly rent plus estimated average monthly cost of utilities (electricity, gas, and water and sewer) and fuels (oil, coal, kerosene, wood, etc.) if these are the responsibility of the renter.  We included households that paid no cash rent but had positive utility costs in our estimates.  We used the annual household income variable, adjusted for inflation and divided by 12, to determine each household’s monthly income. This variable includes the following income sources: wages, salary, commissions, bonuses, and tips from all jobs; self-employment income (net income after business expenses) from non-farm or farm businesses, including proprietorships and partnerships; interest, dividends, net rental income, royalty income, or income from real estates and trusts; Social Security or Railroad Retirement; Supplemental Security Income; any public assistance or welfare payments from the state or local welfare office; retirement, survivor or disability pensions; and any other regularly received income (e.g., Veterans’ payments, unemployment compensation, child support, or alimony).

We subtracted the number of cost-burdened households receiving federal rental assistance in each state from our ACS estimates in order to compute the share of unassisted low-income renters paying too much for rent. (The ACS does not include information on receipt of rental assistance.)

Seniors using vouchers: We followed HUD’s definitions for elderly persons, defined as anyone age 62 or older, according to 2016 HUD administrative data.

Disabled people using vouchers: These figures include any disabled person (including seniors and children), according to 2016 HUD administrative data.  Our demographic categories are not mutually exclusive — for instance, a disabled senior would be counted in the persons with disabilities category and in the senior category.  HUD considers a person disabled if he or she has one or more of the following:

Families and children using vouchers: We relied on 2016 HUD administrative data to determine how many families and children were using vouchers.  We considered any household using with a person under age 18 to be a family with children.  Our demographic categories are not mutually exclusive — for instance, a disabled child would be counted in the persons with disabilities category and in the families with children category.

We used the same methodology as the Department of Health and Human Services’ report Early Childhood Homelessness in the United States: 50-State Profile and the National Center for Family Homelessness’s report America’s Youngest Outcasts: A Report Card on Child Homelessness to estimate the number of children in unstable housing.  The Education Department collects state data on unstably housed children enrolled in school (grades K-12) but not on very young children.  However, recent HUD research has indicated that about half (49.2 percent) of all children experiencing sheltered homelessness in 2015 were under age 6.  We therefore assumed that unstably housed children in grades K-12 represented 50.8 percent of the overall population of children living in unstable housing in each state.  We estimated the total number of children under 18 in unstable housing by dividing the number of unstably housed children in grades K-12 by .058.

Vouchers lost in 2018 if Congress does not increase renewal funding: We estimated that $19.9 billion will be needed in 2018 to renew all housing vouchers that families are currently using in 2017 ($1.5 billion above the 2017 funding level of $18.4 billion).  The 2018 estimate is equal to 2017 renewal funding eligibility, as determined by HUD, adjusted for expected rent and tenant income inflation in 2018, as well as new veterans’, Family Unification Program, tenant protection, and Rental Assistance Demonstration vouchers that have recently been issued and must be renewed for the first time in 2018.  Recent Consumer Price Index data were used to project rent and income inflation in 2018.  We used various HUD data sources to estimate the number and cost of new vouchers that will be renewed for the first time in 2018.

If renewal funding does not increase in 2018, agencies will receive 7.9 percent less renewal funding than they will need to renew all vouchers in use, under our estimate.  This is equivalent to agencies receiving no renewal funding for 7.9 percent of the vouchers that families are using.  To calculate the latter, we used leasing data for the first quarter of 2017 that agencies reported to HUD’s Voucher Management System.

The control group consisted of homeless families that were not offered vouchers or other assistance under the study.  Child separations data are the results reported 20 months into the study; all other data are from the three-year completed study.  A family was considered food insecure if someone in the household had inadequate access to food at some point during the year.  A family experienced housing instability if the family reported spending at least one night homeless or doubled up with another family in the past six months or stayed in an emergency shelter in the past year.

Working or recently working voucher households: We considered households to be working or recently working if at least one member of the household reported wage income in 2015 or 2016 or received unemployment insurance in 2016, according to HUD administrative data.  For this calculation, we relied on HUD’s definition of wage income: earnings from any job, self-employment, or military pay.  For more details on how we determine work status, see “Most Rental Assistance Recipients Work, Are Elderly, or Have Disabilities.”

Voucher assistance payments: This is the sum of all federal payments, rounded to the nearest thousand, made to private property owners for the housing voucher program in calendar year 2016, according to HUD’s Voucher Management System.  It does not include administrative fees paid to public housing agencies.

Pie Chart – Vouchers Help Renters in All Types of Communities: This chart relied on 2016 HUD administrative data and the Housing Assistance Council’s Census tract geographies.  For simplicity, these designations are often collapsed into three general classifications of: 1) small town and rural tracts, 2) suburban and exurban tracts, and 3) urban tracts. 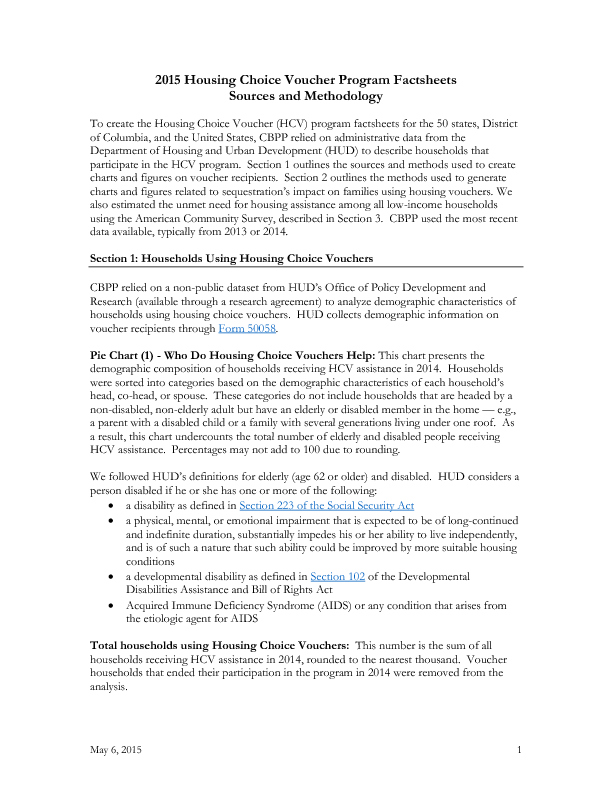