A straight extension of the farm bill with no policy changes, as some in Congress are reportedly advocating if the Senate cannot reach an agreement on floor debate, would lock in food stamp benefit cuts that affect more than 10 million food stamp recipients — including many low-income working families, seniors, and people with disabilities.  These cuts grow deeper with each passing year, shrinking the purchasing power of food stamps, because certain aspects of the Food Stamp Program’s rules do not take into account the effects of inflation.

Both the House and Senate farm bills would, if enacted, address each of the inflation-related cuts (and would make additional improvements in Food Stamp benefits, eligibility, and program oversight).[1] 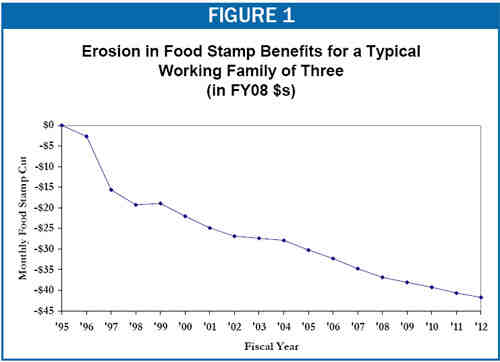 The biggest of the cuts involves the Food Stamp Program’s standard deduction, which has been frozen for most households since 1995.  Overall, food stamp benefits average only about $1 per person per meal.  The freeze in the standard deduction is the deeper of two across-the-board cuts in food stamps that were enacted in the mid-1990s, and is the one that grows deeper each year.

Other areas where a straight extension of the Food Stamp Program would lock in continued erosion of food stamp benefits or eligibility limits as a result of failure to adjust for inflation are below.  The House and Senate farm bills as currently drafted are in agreement about addressing benefit erosion in every one of these areas.

Because these Food Stamp Program rules do not keep pace with inflation, the food purchasing power of millions of low-income households that receive food stamps shrinks with each passing year.  The Farm Bill provides an opportunity to correct this problem, and the House and Senate are in agreement that ending benefit erosion is a significant priority for the 2007 farm bill.  If Congress does not make these improvements and instead extends current law, it will lock in food stamp cuts that are built into the Food Stamp Program rules.

Click here to read the full-text PDF of this report
(9pp.)

[1] The House passed its 2007 farm bill in July.  In the Senate, the Agriculture Committee-passed bill was brought to the floor in early November.  A cloture motion that would have limited debate and allowed the bill to move toward final passage failed shortly before the Thanksgiving recess.  The Food Stamp Program continues to be funded by a temporary “continuing resolution”.