Today’s jobs report is another in the recent string of such monthly reports showing modest job creation.  The unemployment rate dropped surprisingly to 9 percent, but it remains very high. While labor market conditions are brighter than two years ago when the economy was hemorrhaging jobs, the job market remains in a deep slump for people who want to work but can’t find jobs.  It would not be helped by the drag on both the economy and job creation from House Republican efforts to cut domestic spending immediately.

Due to depressed labor force participation and high unemployment, the percentage of people aged 16 and older with a job stands at 58.4 percent – 4.3 percentage points lower than the 62.7 percent at the start of the recession in December 2007 (see chart).  If this employment-to-population ratio were the same 62.7 percent it was in late 2007, over 10 million more people would be working.

The economy is growing, but not fast enough to quickly close the large gap between what the economy is capable of producing at full employment and what it is actually producing.  The Congressional Budget Office (CBO) projects that, under its assumption of economic growth averaging about 3.4 percent a year (it was 3.2 percent in the fourth quarter of 2010), it will take until 2016 for the unemployment rate to fall to 5.3 percent.  Even that slow return to higher employment will require job growth averaging 200,000 a month.

The Federal Reserve has policies in place that would support economic activity and job growth in line with CBO’s forecast, and we may begin to see stronger job growth in coming months.  On the fiscal policy side, the tax-cut and unemployment insurance deal that President Obama and Congress enacted at the end of 2010 is also giving the recovery a boost.

House Republicans, however, would move in the opposite direction, slamming on the brakes by immediately cutting federal discretionary spending.  An immediate spending cut would be the wrong way to go when the economy still needs a boost.

About the January Jobs Report 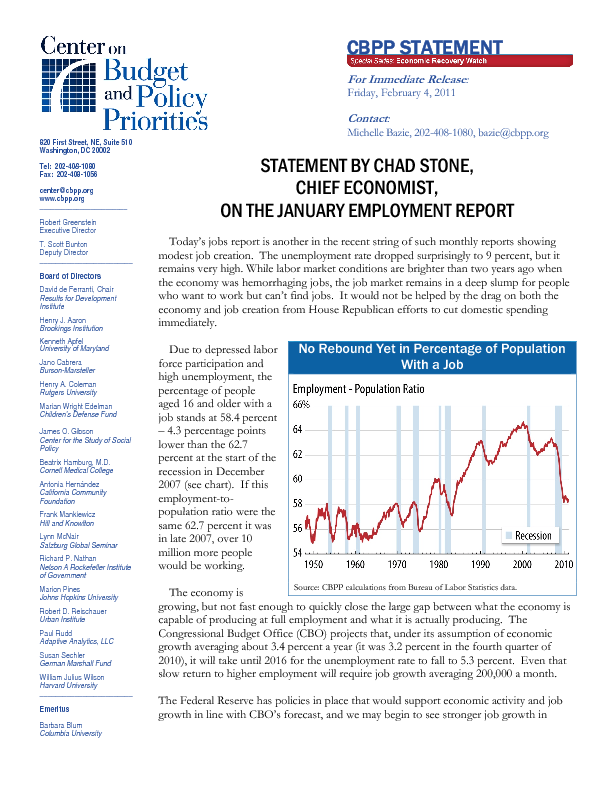