House Budget Committee Chairman Paul Ryan’s “Path to Prosperity” budget, which the House has now passed, is anything but that for most families and individuals.  Affluent Americans would do quite well, but for tens of millions of others, the Ryan plan — which gets 69 percent of its cuts from programs that serve people of limited means — is a path to more adversity.

The budget documents that Chairman Ryan issued earlier this month laud his budget for promoting “opportunity,” even as his budget slashes Pell Grants to help low- and moderate-income students afford college by up to $125 billion over ten years and cuts the part of the budget that funds education and job training (non-defense discretionary funding) far below the already low sequestration levels.  The budget documents also claim to help the poor, even as the Ryan budget shreds key parts of the safety net.  For example, it resurrects the draconian benefit cuts in SNAP (food stamps) that the House passed last fall and adds $125 billion of SNAP cuts on top of them.

The budget also swells the ranks of the uninsured by at least 40 million people.  It repeals the Affordable Care Act (ACA), taking coverage away from the millions of people who have just attained it, and cuts Medicaid by $732 billion (by 26 percent by 2024) on top of the cuts from repealing the ACA’s Medicaid expansion.  Yet it offers no meaningful alternative to provide health coverage to the tens of millions of uninsured Americans.

That’s only a partial list of its cuts.  The budget cuts non-defense discretionary programs by $791 billion below the sequestration level, shrinking this part of the budget to less than half its share of the economy under President Reagan.  Many of these cuts are unspecified, as are $250 billion of cuts in entitlement programs.

Meanwhile, the budget aims to cut the top individual tax rate and the corporate income tax rate to 25 percent, eliminate the Alternative Minimum Tax, and repeal the ACA’s revenue-raising provisions.  These tax cuts would cost about $5 trillion over ten years, based on past analyses by the Urban-Brookings Tax Policy Center.  Yet the House-approved Ryan plan doesn’t identify a single tax break to close or narrow to cover the lost $5 trillion, even though his budget assumes no revenue losses overall.  And it ignores the hard fact that, in his recent tax reform plan, House Ways and Means Committee Chairman Dave Camp only lowered the top individual tax rate to 35 percent even after identifying scores of politically popular tax breaks to narrow or eliminate.

The Ryan budget is thus an exercise in obfuscation — failing to specify trillions of dollars that it would need in tax savings and budget cuts to make its numbers add up.  No one should take seriously its claim to balance the budget in ten years. 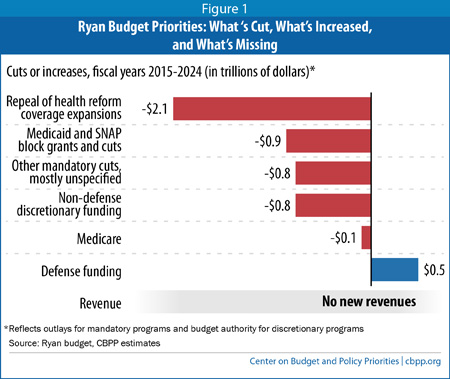 It’s also something of an exercise in hypocrisy — claiming to boost opportunity and reduce poverty while doing the reverse.  Here’s one example: Ryan has criticized some of the poor for not working enough and says that he wants to promote work and opportunity.  But his budget eliminates Pell Grants entirely for low-income students who have families to support, must work, and are attending school less than half time on top of their jobs.

Ten days after open enrollment closed in health reform’s new health insurance exchanges and millions more people have insurance due to the ACA, the Ryan budget would move in the opposite direction.  Those who signed up for coverage through the exchanges and Medicaid in recent months would lose it, and uninsured people who are expected eventually to enroll in such coverage would remain uninsured.

Under the Ryan plan, at least 40 million low- and moderate-income people — that’s 1 in 8 Americans — would become uninsured by 2024.  They include the 25 million otherwise-uninsured people that the Congressional Budget Office (CBO) projects will gain coverage through the ACA by 2024.  They also include the 14.3 to 20.5 million people that the Urban Institute estimated would lose Medicaid coverage by the tenth year from a similar Medicaid block grant proposal in a prior Ryan budget.

The Ryan budget uses misleading rhetoric to justify these proposals.  The budget documents criticize Medicaid for its low payment rates to doctors and hospitals and argue that some Medicaid beneficiaries can have trouble finding doctors.  But cutting federal Medicaid funding by more than one-fourth and turning it over to states in a block grant will inevitably lead states to cut payment rates further, restrict coverage (casting millions into the ranks of the uninsured), limit covered health services (depriving some people of needed treatment), or — most likely — a combination of all of the above.  The Urban Institute analysis of the similar Medicaid proposal in a prior Ryan budget projected that states would likely cut reimbursements to health care providers and managed care plans by about 30 percent by the tenth year.

Chairman Ryan often decries the plight of the poor and the lack of upward mobility in his budget documents, speeches, and hearings.  But his budget would:

Less Investment in Building Blocks of Economic Growth and Opportunity

The Ryan budget doubles down on sequestration, cutting non-defense discretionary programs by $791 billion over the next ten years below sequestration’s already austere levels.  (His funding level is a full $1.1 trillion below the levels under the 2011 Budget Control Act without sequestration.)  By 2024, funding for non-defense discretionary programs would be 36 percent below the 2010 funding levels adjusted only for inflation (and 22 percent below the post-sequestration level) and would fall to 1.7 percent of gross domestic product (GDP).  By contrast, funding for these programs averaged 3.6 percent of GDP under President Ronald Reagan.

Non-defense discretionary programs include basic building blocks of our economy, including education and basic research, as well as core public services such as law enforcement, border security, food and drug safety, and environmental protection.  They also include key supports for low-income families, including Head Start and low-income housing assistance.

Ryan’s Budget Exhibits Lack of Fortitude in This Area

Chairman Ryan’s plan says it balances the budget in ten years.  That requires massive deficit reduction.  But the budget plan contains no new revenues, does not touch Social Security, increases defense funding by $483 billion over ten years (relative to the sequestration levels under current law), and contains slightly smaller Medicare savings over the coming decade than the Obama budget does.  This leaves Chairman Ryan to target programs for low-income and vulnerable Americans and non-defense discretionary programs for draconian cuts.

Many congressional Republicans criticized the Obama budget last month for not containing “serious entitlement reform.”  But, under the Ryan budget, “entitlement reform” largely means gouging the poor and the vulnerable and swelling the ranks of the uninsured by at least 40 million people.

The budget’s lack of courage is also exemplified by its tax proposals — a goal of shrinking the top individual income tax rate to 25 percent and provisions that would eliminate the Alternative Minimum Tax, cut the top corporate rate to 25 percent, and repeal health reform’s revenue provisions.  Based on Tax Policy Center analysis, those tax cuts would likely cost about $5 trillion over ten years, with the benefits flowing heavily to the nation’s most affluent people.  Yet the Ryan plan shows these proposals as having zero cost because they supposedly would be offset, even though the plan doesn’t identify a single dollar of the needed $5 trillion in offsets.

House Ways and Means Chairman Dave Camp’s tax reform plan contains scores of provisions that would scale back tax credits, deductions, and other preferences that many other Republicans (and Democrats) don’t like.  The Ryan plan includes none.  Even with his numerous revenue-raising measures, Camp could only lower the top individual income tax rate to 35 percent.  The Ryan plan ignores that reality.

Budgets are about priorities.  Despite Chairman Ryan’s rhetoric on fighting poverty and boosting opportunity, no fair-minded observer can claim that his proposals reflect those priorities — or sugarcoat their harsh impact on tens of millions of low- and moderate-income Americans.