Note: We have updated our estimate of the proposed SNAP cut to reflect new information.

With widespread and growing bipartisan consensus that the country should do more for struggling families of modest income, House Budget Committee Chairman Tom Price offered a budget plan today that does the opposite.  Largely a retread of budgets that House Republicans adopted in recent years, it calls for $5 trillion in budget cuts, mostly through steep reductions in programs for low- and moderate-income Americans, as well as deep cuts in investments that strengthen productivity and future economic growth such as education, training, and basic research.

Like the last few House budgets, the new budget packs its priorities into a policy path that would bring the budget to balance within the decade without raising any new revenue.  Also like those previous budgets, it doesn’t change Social Security and makes relatively modest cuts to Medicare (though it proposes the dangerous step of converting Medicare into a voucher program for future retirees).  In addition, it boosts defense spending, starting in 2016 with a budget gimmick, and in the years thereafter.

The overwhelming bulk of its $5 trillion in cuts come from three areas: 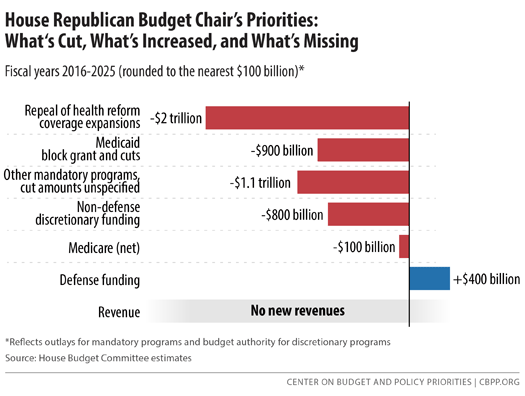 The budget clearly gets the lion’s share of its savings from Americans of modest means.  While we need more data to do a precise analysis, our preliminary estimate suggests that two-thirds or more of the cuts likely come from programs for people with low or modest incomes, even though such programs comprise less than one-quarter of federal program costs.  (Where the plan leaves budget cuts unspecified, we assumed that all programs in an affected program category would face the same percentage cut as that specified for the category as a whole — an approach likely to understate the cuts in means-tested programs.)

The conclusion is inescapable.  The budget would cause tens of millions of people to become uninsured or underinsured, make it harder for low-income students to afford college, shrink nutrition assistance, and squeeze many other such programs.  Consequently, it’s sure to significantly increase poverty, hardship, and inequality.

Spending Well Below the Reagan Levels

The documents that describe this plan state that, under it, total federal spending would average 18.8 percent of GDP over the next ten years and fall to 18.3 percent by 2025, even as the baby boomers retire in large numbers and begin drawing Social Security and Medicare.  That’s far below the 21.8 percent average in the Reagan years, even though, in those years, no baby boomers had yet retired and the elderly were a much smaller share of the population and thus drawing less from Social Security and Medicare.

The documents try to obscure the pain that the budget would impose by largely omitting specifics of the cuts.  For example, they merely state that policymakers would convert programs like Medicaid and SNAP to block grants to states and let the states decide what to do with them.  The plan would cut Medicaid by $913 billion over ten years on top of the Medicaid cuts from repealing health reform’s Medicaid expansion.  And as noted, the SNAP cuts apparently total about $125 billion (more than three times the size of the harsh and highly controversial SNAP cuts that the House passed in September 2013).  This hide-the-details approach prevents analysts and reporters from assessing how these cuts would affect working-poor families, low-income children, and poor seniors, many of whom would see their basic food benefits or health care coverage eliminated or cut back sharply.

Nevertheless, we can discern some tangible consequences.  For instance, repealing health reform’s Medicaid expansion means that at least 14 million people would lose their Medicaid coverage or no longer gain such coverage in the future.  (That’s the Congressional Budget Office’s estimate of the number who have or are expected to gain coverage under the Medicaid expansion.)  Repealing health reform’s subsidies to purchase health insurance would jeopardize coverage for millions more.  The severe cut in federal Medicaid and CHIP funding under the block grant would force states to substantially scale back or drop Medicaid and CHIP coverage for many other low-income people who have it.  Overall, tens of millions of people would likely become uninsured or underinsured.

The plan thereby violates several core principles that underlay the separate bipartisan plans that Alan Simpson and Erskine Bowles (co-chairs of the National Commission on Fiscal Responsibility and Reform) and the Bipartisan Policy Center’s Rivlin-Domenici Debt Reduction Task Force produced in late 2010.  Those plans featured very large deficit reduction, but they included substantial revenue increases as well as program cuts.  And they rested on a core principle that deficit reduction should not increase poverty or inequality.  The House budget does the opposite.

The plan claims to adhere to the sequestration levels for 2016 for both defense and non-defense discretionary programs, but that’s false advertising.  It circumvents the sequestration cap for defense in 2016 by pouring additional funding into the Overseas Contingency Operations fund in 2016, which doesn’t count against the defense cap.  It adds about $39 billion in 2016 beyond what the Pentagon says it needs for overseas military operations, with the implication that the Pentagon will channel those excess dollars into the regular defense budget.  One year ago, the Republican-controlled House Budget Committee denounced this gimmick, calling it “a backdoor loophole that undermines the integrity of the budget process.”

The plan also adds money for defense above the sequestration levels for the years after 2016.  Over the decade, it provides nearly $400 billion in additional defense funding even as it slashes funding for non-defense discretionary programs to record lows, as discussed above.

Sadly, the Chairman’s plan doubles down on the type of extreme and ideological measures that have characterized House budgets in recent years.  If its policies were to become law, ours would be a coarser, more mean-spirited nation with higher levels of poverty and inequality, less opportunity, and a future workforce that’s less able to compete with its counterparts overseas.