Today’s jobs report sent mixed signals about the overall job market but left no doubt that long-term unemployment remains a significant problem — making clear that policymakers must not let emergency federal unemployment insurance (UI) expire at the end of the year.

Two-fifths of the unemployed in September (4.8 million people) had been looking for work for 27 weeks or longer; that long-term unemployment accounted for 3.1 percentage points of the overall 7.8 percent unemployment rate (see chart).  Yet emergency federal UI, which provides additional weeks of benefits to the long-term unemployed (i.e., benefits beyond the 26 weeks of regular UI in most states), is scheduled to expire on December 31.

The drop in the unemployment rate to 7.8 percent accompanied by a rise in labor force participation is a good sign — if it’s a harbinger of further improvement.  But the continued sluggish growth in payroll employment — only 114,000 jobs added in September — suggests that it’s premature to think long-term unemployment will fall quickly.

Policymakers have enacted emergency federal UI in every major recession since 1958, and they have never allowed any of these previous programs to expire before the unemployment fell to 7.2 percent or lower. 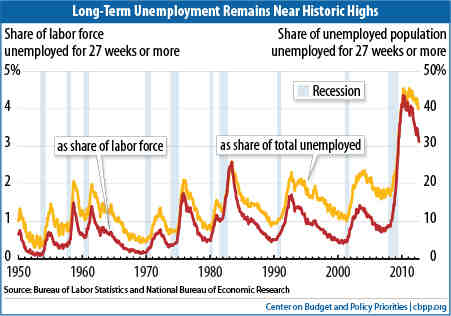 UI is one of the most cost-effective policies available for boosting economic growth and employment in a weak economy, and emergency federal UI has been an important source of support since mid-2008 for both unemployed workers and their families and the economy.  Phased-in cuts this year in the maximum number of weeks of benefits, which policymakers enacted in February, have already weakened that support, and it will end altogether if policymakers allow the program to expire at the end of this year.

With economic growth continuing to disappoint and unemployment expected to remain around 8 percent into next year, the Federal Reserve has already embarked on a new round of securities purchases (QE3) to lower interest rates and stimulate growth.  But, as Federal Reserve Chairman Ben Bernanke said at the QE3 press conference September 13, the Fed can’t fix things on its own.  Policymakers must address the changes in taxes and spending that are scheduled for the end of the year (the so-called “fiscal cliff”) so they do not harm the economy.  While addressing the fiscal cliff, policymakers surely should continue emergency federal UI.

About the September Jobs Report

Job growth was weak in September but the unemployment rate dropped below 8 percent.