Today’s employment report is a reminder that the economy’s troubles run deeper than the financial market distress that is monopolizing the headlines. Enacting the financial rescue plan before the House today is vital to reduce the risk of financial meltdown and an ensuing economic contraction more severe than any since the 1930s. But enacting the plan will not by itself get the economy out of its current slump or help workers who have not been able to find a job in the current weak labor market. Congress can and should do more. A good place to start is with the one million-plus jobless workers who will exhaust their unemployment benefits by year-end unless Congress provides additional weeks of benefits before adjourning.

September was the ninth straight month of job declines, with employers shedding a net 760,000 jobs so far this year (nearly a million jobs have been lost in the private sector). The official unemployment rate was 6.1 percent in September, and other indicators show even greater labor market weakness. The percentage of the population with a job (62.0 percent) has not been lower since 1993. The Labor Department’s most comprehensive alternative unemployment rate measure — which includes people who want to work but are discouraged from looking and people working part time because they can’t find full-time jobs — stood at 11.0 percent in September, its highest level since April 1994. In addition, more than 1 in every 5 of the 9.5 million unemployed have not been able to find a job despite looking for 27 weeks or more. 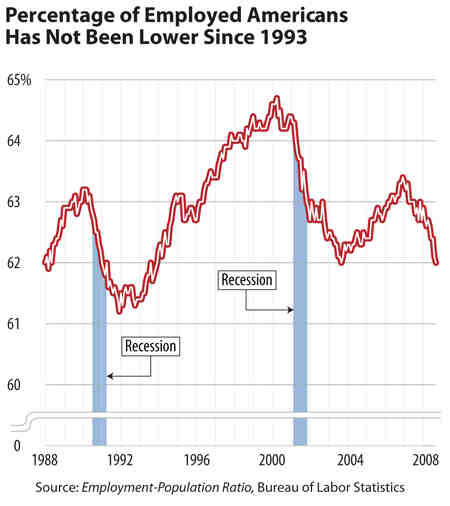 Signs that the economy is weakening are everywhere. The effects of the first economic stimulus package appear to have run their course; consumer spending (which is over two-thirds of GDP) was anemic in August, pointing to the possibility of a decline in personal consumption expenditures this quarter for the first time since 1991. Auto sales are plummeting, and the ISM manufacturing index, which had been signaling only a mild contraction, suffered its largest decline since 1984 in September. As today’s jobs report shows, the labor market is particularly weak. Claims for unemployment insurance are approaching 500,000, their highest levels since late 2003.

At the end of June, policymakers enacted an additional 13 weeks of unemployment insurance (UI) benefits for workers exhausting their regular benefits. Workers who began to receive benefits in July will exhaust them this month. The National Employment Law Project estimates that nearly 800,000 workers will exhaust their extended benefits in October and over 350,000 more will exhaust theirs in November and December. Both houses of Congress have legislation before them to add additional weeks to the temporary extended benefits program. Ideally, Congress should pass this as part of a more comprehensive economic stimulus package. Barring that, lawmakers should pass the stand-alone legislation before adjourning.