Today’s jobs report, with disappointing job growth and a large drop in the labor force, shows that a robust jobs recovery remains elusive.  That situation won’t likely improve in coming months as the sequestration budget cuts begin to slow the economic recovery and make it harder for the unemployed — especially the unprecedented numbers of long-term unemployed (see chart) — to find a job.  Adding insult to injury, sequestration also cuts federal unemployment insurance (UI) benefits for the long-term unemployed.

Sequestration will subtract 0.6 percentage points from economic growth in 2013, suppressing job growth by 750,000 jobs, the Congressional Budget Office (CBO) estimates.  That will come on top of the drag on growth and job creation from the expiration of the payroll tax cut at the end of 2012.  Due in large part to these factors, CBO expects the economy to grow only 1.4 percent in 2013 and the unemployment rate to remain above 7½ percent through next year.

Federal emergency UI provides additional weeks of unemployment compensation to people who run out of regular state UI benefits before they can find a job (typically after 26 weeks).  Normally, the federal benefit is the same as the state benefit (an average of roughly $300 a week), but sequestration will reduce the federal benefit enough to generate the required budget savings over the remainder of fiscal year 2013, which ends on September 30.  Sequestration also cuts federal funding for the states’ costs of administering UI and for employment and training programs that help the unemployed get back to work sooner. 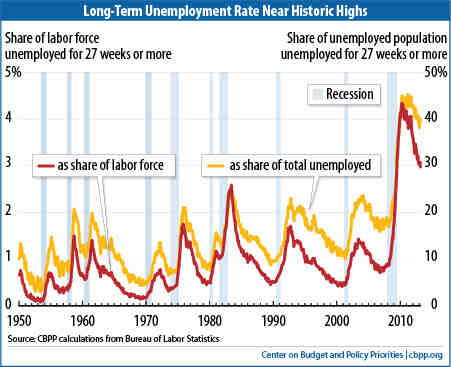 Policymakers do not need to maintain sequestration to put the budget on a sustainable path — that is, a path that “stabilizes” the debt so it stops growing faster than the economy over 10 years.  Consequently, policymakers should replace sequestration with a balanced set of policies that phases in deficit reduction without jeopardizing the economic recovery or imposing unnecessary hardship on the long-term unemployed and other vulnerable people.  Ideally, policymakers would couple temporary new fiscal measures to accelerate growth and job creation now with permanent, phased-in deficit-reduction measures, as former Office of Management and Budget and CBO director Peter Orszag, former Federal Reserve Board Vice Chairman Alan Blinder, and other economic and budget experts have recommended.