Today’s employment report shows that the economy is creating jobs at a solid pace. But it also reminds us that without even stronger job growth, it will take years to erase the large jobs deficit that the 2007-2009 recession created (see chart) and to lower the unemployment rate to an acceptable level. Immediate sharp cuts in government spending of the kind that some policymakers are seeking will make it even harder to restore a healthy job market. 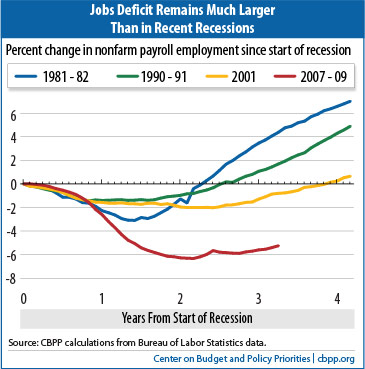 Unfortunately, the economy seems to be losing momentum, not gaining it. We need economic growth of 3½ to 4 percent a year to close the jobs deficit in any reasonable amount of time. The economy grew at a 3.1 percent annual rate in the fourth quarter and likely grew less than that in the first quarter of this year. The problems are inadequate demand for goods and services and excess productive capacity. Perversely, some policymakers are insisting that, in the name of deficit reduction, the White House and Congress should make immediate large cuts in spending, which will reduce demand and impede efforts to create more jobs, while simultaneously calling for permanent extensions of President Bush’s tax cuts, which will have no impact on job creation when it matters most while impeding efforts to reduce the long-term budget deficit.

Job growth was solid in March, but other indicators show that the labor market remains in a deep slump.