PDF of this statement (2pp.)

The sharp deterioration in the job market that continued in February was, as expected, grim, underscoring why it was so important that Congress enact an effective economic recovery law last month.  No one should expect that law to put the economy back on track immediately.  But if federal, state, and local governments implement the law wisely and expeditiously, it will significantly limit further increases in unemployment and boost the number of jobs well above what it otherwise would be over the next several years.

The recession that began in December 2007 has entered its 15th month, and job losses continue unabated.  The Congressional Budget Office estimates that without the recovery law, the unemployment rate would have reached 9.0 percent in the fourth quarter of this year.  If the high end of CBO’s estimate of the law’s effectiveness proves accurate, the unemployment rate in the fourth quarter of this year could be held to close to where it is today — about 8 percent — and decline thereafter (see graph).  But even at the low end of CBO’s estimate of effectiveness, the law would shave a half point off the rise in unemployment this year.  (Other forecasts differ on the specifics of the economy’s path in the absence of the recovery law, but they too show that the law will have a significant positive impact on the economy.)

The bad news in today’s jobs report is pervasive. 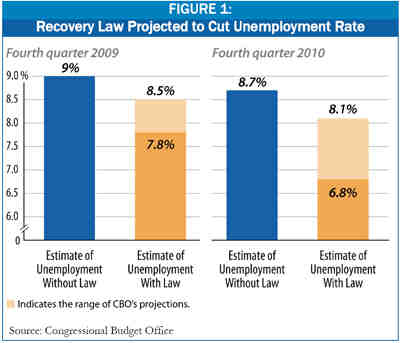 For the recovery law to stem the tide of job losses and lay the groundwork for a strong recovery as quickly and effectively as possible, federal, state, and local governments have to get programs up and running quickly.  In particular, states must use the money that Congress provided to them as intended so that it will have maximum effectiveness as stimulus.  (See the Center on Budget and Policy Priorities analysis, “If States Fail to Use Stimulus Funds as Intended, Efforts to Strengthen the Economy Could Be Undercut.”)