Today’s disappointing jobs report, while perhaps only a blip in an ongoing labor market recovery, is a sober reminder of how devastating the Great Recession and subsequent prolonged jobs slump has been for workers.  In particular, the share of the population with a job, which plunged to its lowest levels since the early 1980s, has since risen only modestly even though we’re now more than five years into the recovery (see chart).  The share of the labor force that’s working fewer hours than it would like remains high, as does long-term unemployment.

Some of the decline in the share of Americans with a job reflects demographic rather than economic factors — mainly the growing number of baby boomers who have retired.  But a significant part reflects not only an elevated unemployment rate but also reduced labor force participation, as many people who want to work have stopped looking until their job prospects improve.  A robust economic recovery would cure these problems. 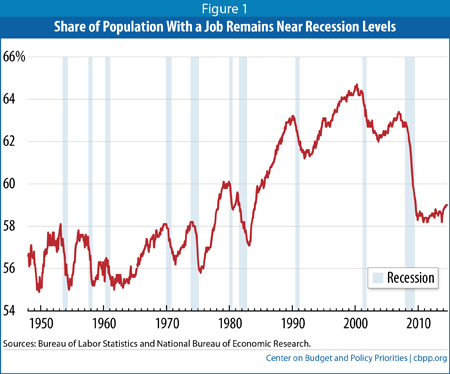 Other labor market legacies of the Great Recession and slow recovery are deeply troubling.  Many people who might still be looking for work if not for the protracted jobs slump have retired prematurely or otherwise dropped out of the labor force, and they won’t likely return even with stronger demand.  Many of them likely are people who experienced very long unemployment during the jobs slump.  Even for the long-term unemployed who continue looking, extended joblessness appears to carry a stigma that heightens employer reluctance to hire them — over and above the erosion of job skills that the long-term unemployed often experience.

Policymakers’ shortsighted decision not to renew federal emergency unemployment insurance benefits in 2014 eliminated not only valuable financial support for these workers and their families but also a valuable source of consumer spending that would have strengthened demand and put more jobless Americans back to work.  It also would have induced more of the long-term unemployed to remain in the labor market looking for work.

Employers reported only modest payroll growth in August.  In the separate household survey, the unemployment rate edged down to 6.1 percent, but most of the decline resulted from labor force attrition, not employment growth.