Today’s disappointing jobs report shows that labor market conditions continue to improve only at a glacial pace compared with what’s needed to restore employment to normal levels.  Unemployment remains too high and the share of the population with a job remains depressed at levels last seen in the 1980s (see chart).  Under these conditions, it’s disappointing that the Federal Reserve will likely begin tapering off its asset purchases (known as “quantitative easing”); it’s absolutely appalling that lawmakers have not enacted a balanced alternative to the sequestration budget cuts that would take effect only when the economy is stronger.

In August, the employment-population ratio for people aged 16 and older was 58.6 percent, 4.1 percentage points lower than at the December 2007 start of the recession.  Part of that decline reflects higher unemployment.  At 7.3 percent, the unemployment rate was 2.3 percentage points higher than in December 2007.  But, part of it also reflects a decline in labor force participation, as people are waiting for labor market conditions to improve before they look for work.

Finally, part of it reflects the changing age-structure of the population, with the baby boom generation starting to reach age levels that typically have lower labor force participation rates and employment-population ratios.  Nevertheless, the August employment-population ratio of 75.9 percent for people aged 25 to 54 — the prime working-age population — was also much lower (3.8 percentage points) than in December 2007.

Restoring employment to normal levels in a reasonable period of time requires stronger economic growth and faster job creation.  The economic boost from the 2009 Recovery Act peaked in 2010 and, with its emphasis on immediate deficit reduction through spending cuts and tax increases, fiscal policy at both the federal and state and local levels has hampered the recovery ever since.  Monetary policy has supported the recovery but, with interest rates close to zero, the Federal Reserve has had to use unconventional methods to try to encourage businesses and households to spend more. 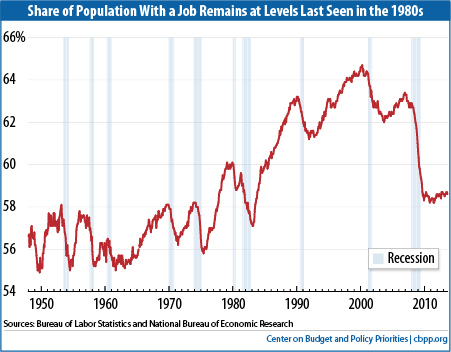 Whatever the Fed’s next steps, it shows no inclination to expand those efforts.  If lawmakers want to restore normal employment more quickly, they need to step up to the plate and replace the sequestration budget cuts with a balanced package of tax and spending changes that phase in more slowly so that they don’t weaken the recovery but that also build up more rapidly in later years — putting deficits and debt on a better long-term trajectory.  Better yet, they should enact a package that provides up-front stimulus as well as substantial phased-in deficit reduction.

Job growth in August was moderate, and the drop in the unemployment rate reflected more people leaving the workforce, not more people finding jobs.  A robust jobs recovery remains elusive.