Despite modest improvements in overall median income and health insurance coverage, the new Census data are disquieting.  Though 2007 was the sixth (and likely the final) year of an economic expansion, 4.4 million more Americans were poor, the median income of non-elderly households was $1,100 lower, and nearly 6 million more Americans were uninsured than in 2001 — even though the economy was in recession that year.

This is unprecedented. Never before on record has poverty been higher and median income for working-age households lower at the end of a multi-year economic expansion than at the beginning. The new data add to the mounting evidence that the gains from the 2001-2007 expansion were concentrated among high-income Americans.

Compared to 2006, overall median household income edged up 1.3 percent in 2007. Median income for “working age” households — those headed by someone under 65 — remained statistically unchanged, however, and the number (although not the percentage) of Americans living in poverty increased by 816,000 people to 37.3 million.

The data also show that employer-based health coverage — and private health coverage in general — continued to erode in 2007, and that all of the improvement in health care coverage in 2007 was due to more Americans obtaining coverage through government health insurance programs, principally Medicare and Medicaid.

Data for 2008 Expected to Be Unfavorable

The data for 2007 are of particular concern given that the economy is now in a slowdown, and poverty is almost certainly higher now — and incomes lower — than in 2007. The 2007 levels — already disappointing because they are worse than those for the 2001 recession — are likely to constitute a high-water mark for the next few years. This suggests that significant pain may lie ahead for many Americans.

The number and percentage of Americans who are uninsured also are likely to rise in 2008, and probably in 2009 as well given widespread forecasts that unemployment is likely to continue rising at least through the first part of that year. The numbers of uninsured parents and children are likely to grow as employers lay off more workers and states consider cuts in their Medicaid programs to help balance their budgets during the economic slowdown. Congress and the President can help cushion this blow — and avert cuts in Medicaid that further swell the ranks of the uninsured — by temporarily boosting federal support for state Medicaid programs as they did during the last downturn. Policymakers also could reconsider children’s health legislation. The nation missed an excellent opportunity to make major progress in reducing the number of uninsured children when President Bush twice vetoed legislation last year that the Congressional Budget Office estimated would result in 4 million uninsured children gaining coverage.

More broadly, the next President and Congress should consider setting a national goal to reduce poverty and acting upon it, as former Prime Minister Tony Blair did in the United Kingdom. A number of charitable organizations and poverty experts have called for establishing a national goal to cut poverty in half over the coming decade. 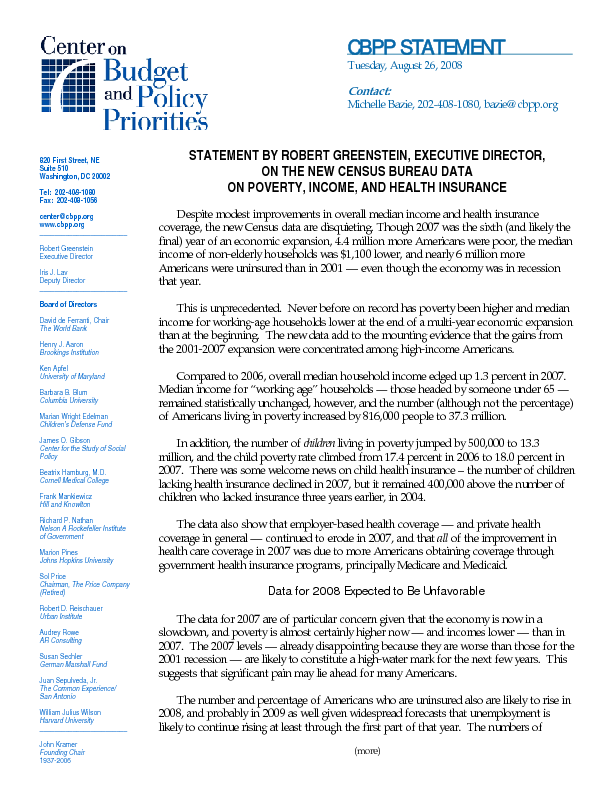 PDF of this statement (2pp.)