Higher education funding remains well below pre-recession levels in almost all states, a new CBPP report shows.  As a result, colleges and universities have had to raise tuition and make spending cuts that may diminish the quality of education available to students at a time when a highly educated workforce is more crucial than ever to the nation’s economic future.

“The jobs of the future will require college-educated workers,” said Michael Mitchell, policy analyst at the Center on Budget and Policy Priorities and author of the report.  “For the sake of their economies and their future workforces, states should start reinvesting in its colleges and universities now.” 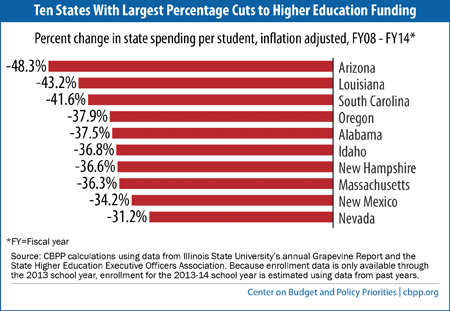 Eight states cut per-student higher education funding further this year even as the economy recovers and revenues have returned to pre-recession levels.

Deep Cuts Have Had Major Consequences for Schools and Students

These sharp increases in tuition have accelerated longer-term trends of reducing college affordability and shifting costs from states to students and their families.  Federal student aid and tax credits have risen, but on average they have fallen short of covering the tuition increases.  The tuition increases have contributed to a swelling in student debt levels since the start of the recession — up 20 percent for the average bachelor’s degree recipient.

“High levels of student debt are a major problem, and rapidly rising tuition is scaring some students away from enrolling in college altogether,” said Mitchell.  “States can help relieve students of crippling debt and keep college affordable for students and their families by re-investing in public colleges and universities.”

States’ Budget Choices Will Determine Whether They Can Successfully Rebuild Their Higher Education Systems, Strengthen Economies in Long Run

A large and growing share of future jobs will require college-educated workers.  Sufficient funding for higher education to keep tuition affordable and quality high at public colleges and universities, and to provide financial aid to those students who need it most, would help states to develop the skilled and diverse workforce they will need to compete for these jobs.

Such funding is unlikely to occur, however, unless policymakers make sound tax and budget decisions in the coming years.

“To ensure that public colleges and universities are a place where middle-class and low-income students can receive a high-quality and affordable education, states need to reject calls for tax cuts,” said Mitchell. “Some will need to consider options for new revenues.”

The full report, States Are Still Funding Higher Education Below Pre-Recession Levels, is available at https://www.cbpp.org/cms/index.cfm?fa=view&id=4135.