A new study of three years of Administration tax cuts, issued by the Center on Budget and Policy Priorities, finds adverse fiscal, distributional, and long-term economic effects from the tax cuts.  The study,

Tax Returns: A Comprehensive Assessment of the Bush Administration Tax Cuts
, represents perhaps the most comprehensive analysis yet issued of the effects of the tax cuts, synthesizing previous findings on both the 2001, 2002, and 2003 tax cuts and the tax policy proposals in the Administration’s fiscal year 2005 budget and featuring significant new data from the Urban Institute-Brookings Institution Tax Policy Center.

Among the study’s highlights:

“The tax cuts have contributed to federal revenues, measured as a share of the economy, dropping to their lowest level since the Truman Administration, and have conferred the greatest benefits on households at the highest income levels,” said Isaac Shapiro, senior fellow at the Center on Budget and Policy Priorities and co-author of the study.  “The tax cuts also have produced less economic stimulus and job growth than could have been accomplished with the same or even lesser amounts of resources, because the tax cuts were poorly designed to respond to the economic slump.” 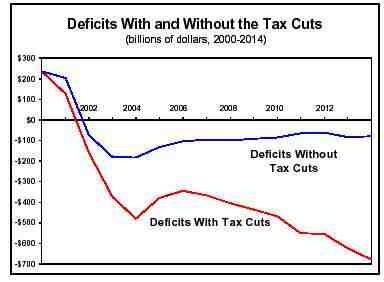 Shapiro added: “The problems that the tax cuts pose are likely to grow more severe if the tax cuts are made permanent, since the persistent, large deficits to which they would be a major contributing factor are likely to slow future economic growth, saddle future generations with sizable interest payments on a greatly enlarged national debt, and leave the nation ill-prepared for the retirement of baby boomers.”

Other significant findings from the study include the following.

The tax cuts enacted over the past three years include three major “middle-class” provisions:  the provisions establishing the 10 percent tax bracket, expanding the Child Tax Credit, and providing tax relief to married couples. These three tax cuts were enacted in 2001 and became fully effective in 2003, when their implementation was accelerated.

The study also finds that these three middle-class provisions would account for only about one-third of the cost of the tax cuts when the Administration’s tax cuts were fully in effect.  The bulk of the tax-cut benefits that the middle class will receive thus could have been provided for about one-third of the long-term cost that the Treasury will bear if the Administration’s full tax-cut agenda is enacted, with nearly all of the recent tax cuts being made permanent and some new tax cuts being added on top.

If the Administration’s tax-cut agenda is approved (and relief from the swelling Alternative Minimum Tax is continued, as most observers expect it will be), future costs will be extremely large.

In addition to the large tax cuts they are now receiving, high-income households secured huge gains in income in the 1980s and 1990s.  The Congressional Budget Office publishes the most comprehensive data available on changes in incomes and taxes for different income groups.  Just-released CBO data cover years from 1979 until 2001.  These data show:

Job growth during this recovery might have lagged well behind that of previous recoveries even if recent economic policies had been better designed.  Nonetheless, the unusually poor job growth of the past couple of years suggests the Administration’s tax cuts have fallen well short of accomplishing one of their stated goals.

Overall economic growth also has been below par.  Whether measured from the start of the recession or the end of the recession, the economy has grown more slowly in the past few years than it grew, on average, at comparable stages of other post-World War II recoveries.

The Administration has highlighted the tax-cut benefits the middle class has received and also has promoted its tax cuts as being highly beneficial to groups such as small business owners.  The Center’s study finds much of the information the Administration has put forward on these matters has been selective or misleading.  As one example, President Bush has often cited the “average” tax cut that American families are receiving.  The large majority of families, however, are getting considerably less than this “average” amount.  The tax cut that the typical household will receive in 2004 is less than half the amount that the President has described as being the “average” tax cut this year.  The Administration’s average tax-cut figures are skewed upward by the inclusion of the very large tax cuts going to a relatively small number of very affluent taxpayers.

The Center’s study concludes that the majority of Americans are likely to end up worse off over time as a result of the tax cuts, because action ultimately will need to be taken to rein in burgeoning deficits and pay for the tax cuts.  “Because the tax cuts are so tilted toward the highest-income households,” said Joel Friedman, a senior fellow at the Center and co-author of the report, “the burden of financing these lopsided tax cuts eventually is likely to be borne disproportionately by households that have gained only modestly from the tax cuts.  This will be the case unless offsetting spending cuts or tax increases are enacted that reduce benefits or raise taxes primarily on high-income households, an unlikely scenario.  Over the long term, most Americans may well end up as net losers from the tax cuts.”