A group of leading economists, including five Nobel Laureates in economics, today publicly released a letter to President Obama and Congress opposing a constitutional balanced budget amendment. The letter outlines the reasons why writing a balanced budget requirement into the Constitution would be "very unsound policy" that would adversely affect the economy. Adding arbitrary caps on federal expenditures would make the balanced budget amendment even more problematic, the letter says. The Economic Policy Institute and the Center on Budget and Policy Priorities organized the letter.

"A balanced budget amendment would mandate perverse actions in the face of recessions," the letter notes. By requiring large budget cuts when the economy is weakest, the amendment "would aggravate recessions."

We, the undersigned economists, urge the rejection of proposals to add a balanced-budget amendment to the U.S. Constitution. While the nation faces significant fiscal problems that need to be addressed through measures that start to take effect after the economy is strong enough to absorb them, writing a requirement into the Constitution that the budget be balanced each year would represent very unsound policy. Adding additional restrictions, as some balanced budget amendment proposals would do, such as an arbitrary cap on total federal expenditures, would make the balanced budget amendment even worse. 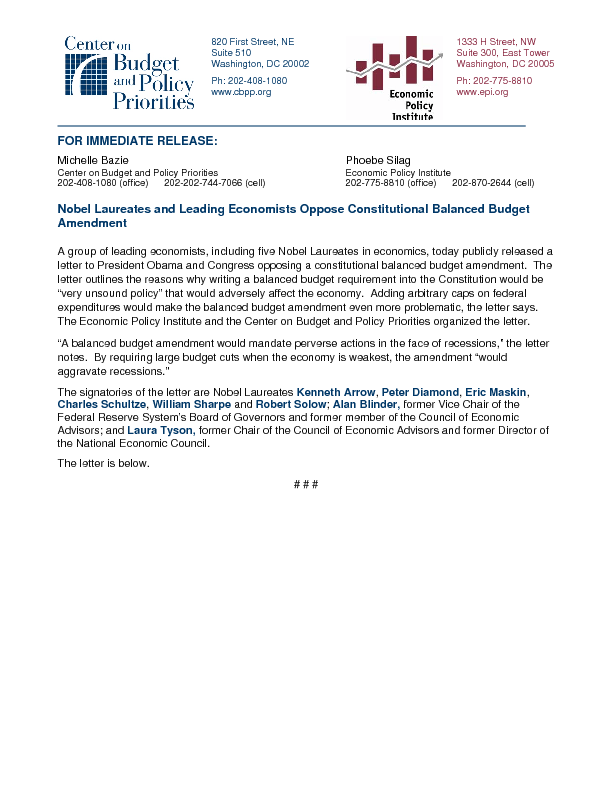 PDF of this press release and letter (3pp.)