With New York’s Commission on Property Tax Relief planning to recommend that the state impose a rigid cap on property taxes for education based on Massachusetts’ Proposition 2 ½, a new report from the Washington, D.C.-based Center on Budget and Policy Priorities describes the problems the law has created in Massachusetts.

“Across Massachusetts, a number of communities have been forced to lay off teachers, police officers, firefighters, and other public employees; close fire stations; shut libraries, senior centers, and recreation centers or sharply reduce their hours; and scale back public school programs.  One town even turned off its street lights to save money,” said Iris Lav, the Center’s deputy director and co-author of the report.

According to the report, Proposition 2 ½, which limits the growth in communities’ property tax revenue for all services including education to 2.5 percent a year, has:

Examples of Service Cuts Under Proposition 2 ½

“Having led a municipality for eight years under Proposition 2 ½, I have seen first-hand that the law does not permit adequate funding of core local responsibilities such as public safety and education.” said Northampton, Massachusetts Mayor Mary Clare Higgins.

Impact in New York Could Be Even More Severe

“Massachusetts had many advantages in the 1980s that helped blunt the impact of Proposition 2 ½ on localities, at least temporarily.  New York doesn’t have those advantages today,” Frank Mauro, executive director of the Fiscal Policy Institute, explained.  Thus, if New York were to adopt a property tax cap, the results could be more troubling than they are in Massachusetts.

For example, Massachusetts enjoyed unusually strong economic growth during the 1980s — the so-called “Massachusetts Miracle.”  This enabled the state to replace some of localities’ foregone property tax revenues with state funds.

Also, Massachusetts’ K-12 enrollment dropped by a fifth during the 1980s, which helped reduce education expenses.  And the state has an effective system of local aid that targets aid where it is most needed, among lower-income communities.

“In New York, adopting a cap could have highly negative consequences for education.  And that, in turn, could make the state a less desirable place to live, which would harm economic development,” said Mauro. 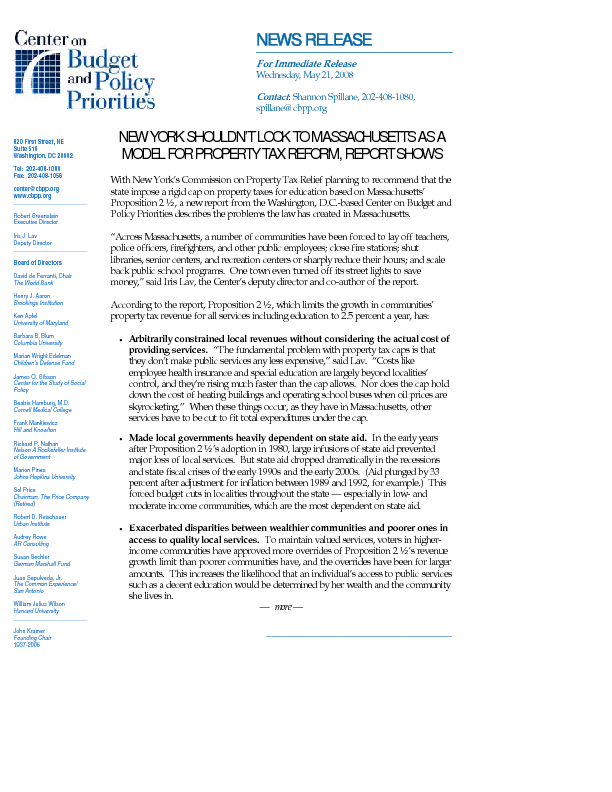 PDF of this press release (2pp.)