A new set of long-term budget projections issued by the Center on Budget and Policy Priorities — the first projections to incorporate the new ten-year estimates issued last week by the Congressional Budget Office — show that the nation’s long-term fiscal situation is grim.  They also shed light on the sources of these problems and on the types of changes that would be needed to address them.

The national debt, now 37 percent of the size of the U.S. economy, will soar to 231 percent of the economy by 2050 if current budget policies are continued (e.g., laws governing entitlement programs are not changed and the Administration’s tax cuts are extended).  At that point, interest payments alone would soak up more than half of federal revenues.

“This nation is on an unsustainable budget path, one that will produce dangerously large deficits and debt unless some significant changes — and some difficult decisions — are made,” said Robert Greenstein, the Center’s executive director.

While last week’s CBO report was more optimistic than earlier CBO projections about the budget outlook for the next ten years, it also stated that “The favorable pattern of these projections . . . does not . . . indicate a substantial change in the nation’s long-term budgetary challenges.”  The Center’s new projections, which fall roughly in the middle of the range of long-range projections previously issued by other institutions and analysts, show that those challenges are formidable. 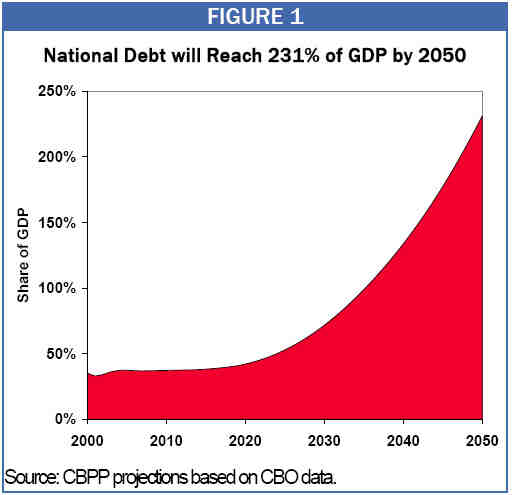 The Center’s analysis explains that the main sources of rising government expenditures are rising costs throughout the health care system and, to a lesser degree, demographic changes.  Together, these two forces will cause the “big three” entitlement programs — Medicare, Social Security, and Medicaid — to grow considerably faster than the economy or federal revenues.

All other programs, including all entitlement programs other than the “big three,” are projected to grow more slowly than the economy in coming decades, so they will not contribute to the projected rise in deficits and debt.  Common pronouncements that the nation’s fiscal problems result from a general “entitlement crisis” are thus mistaken.

Addressing the nation’s fiscal problems will require fundamental health care reform because cost growth in Medicare and Medicaid is largely driven by cost growth in the health care system as a whole, both public and private.  Trying to slow health care costs in the public sector without addressing costs in the private sector would require draconian cuts in Medicare and Medicaid that would have severe effects on the poor, the elderly, and those with serious disabilities, the Center’s analysis finds.

To some extent, such cuts also would simply shift health care costs from the public to the private sector, the analysis explains, such as by forcing hospitals to provide more uncompensated care, the costs of which they would pass on to private-sector patients.

As Comptroller General David Walker, head of the Government Accountability Office, has concluded, “in order to address the long-term fiscal challenge, it will be necessary to find approaches that deal with health care cost growth in the overall health care system.”

Tough choices will be needed in the area of revenues as well.  Allowing the 2001 and 2003 tax cuts to expire as scheduled — or fully offsetting the cost of extending them — would reduce the budget shortfall through 2050 by 60 percent.  This is because the resulting deficit reduction would have a steadily increasing impact on federal interest payments over time, reducing deficits more with each passing year.

That the tax cuts are a major contributor to the nation’s long-run fiscal problems should come as no surprise.  In today’s terms, the tax cuts’ annual cost (when they are fully in effect) will exceed the entire budgets of the Departments of Education, Homeland Security, Veterans Affairs, Housing and Urban Development, State, and the Environmental Protection Agency combined.

Eliminating or offsetting the costs of the tax cuts is no panacea, as this step, by itself, would fall well short of closing the long-term budget shortfall.  Nonetheless, the decisions policymakers make about taxes over the next several years will have important implications for the nation’s fiscal future.

“The problem we face is too large to be solved solely by raising taxes or solely by reducing programs,” said Jim Horney, director of federal fiscal policy at the Center.  That would require the equivalent of an immediate and permanent 18 percent increase in tax revenues or an immediate and permanent 15 percent reduction in all government programs, including Social Security, Medicare, defense and anti-terrorism activities, education, veterans’ benefits, law enforcement, border security, environmental protection, and assistance to the poor.  “Both sides of the budget will have to be on the table when serious conversations about long-term deficit reduction begin,” he concluded.