Broadening the sales tax base to encompass more services, a step that tax experts have long recommended to modernize state tax systems, is receiving renewed attention because of the state fiscal crisis, according to a major new report from the Center on Budget and Policy Priorities. The report provides state-specific information on what services states now tax, how much revenue they forgo by failing to tax selected services, and how much revenue they could raise by taxing services comprehensively.

Some states report that their budgets for the fiscal year that began July 1 are already out of balance; given the severity of the recession, other states will likely face the same problem before the year is out. In addition, several states are predicting large gaps for next year. Such states are likely to consider new tax increases to help balance their budgets.

“When it comes to tax reform, times of crisis can also be times of opportunity,” said Michael Mazerov, a senior fellow at the Center and author of the report. “During the boom years of the 1990s, states had little interest in updating their sales tax to reflect the shift toward a service-oriented economy. Now, several states are looking at taxing more services, and more may join them if states’ budget problems continue.”

Maine broadened its sales tax in June. Proposals to expand taxation of services have gained support in the North Carolina legislature and are likely to be part of broader tax reform the legislature will consider this year or next. Official tax study commissions charged with finding ways to put state finances in California and Colorado on a solid footing for the future are also considering wider taxation of services. Earlier in the decade, Arkansas, Nebraska, and New Jersey taxed additional services to help address fiscal problems.

Household spending has been shifting from goods to services for decades. In 2007, household purchases of services (excluding housing) represented 45 percent of personal consumption expenditures; the trend is likely to continue slowly but steadily upward. 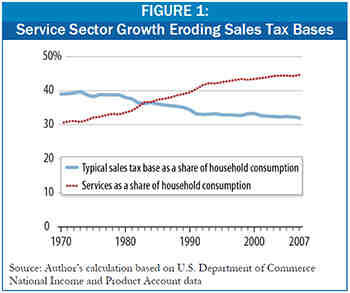 Most states continue to apply their sales tax to less than one-third of 168 potentially taxable services, according to the Federation of Tax Administrators.

To preserve an adequate sales tax over the long term, states will need to tax services more broadly, the report states. This could generate substantial revenue. Maine expects that its recent move to tax more services will boost sales tax collections by 4.4 percent.

States that do not tax services to any significant degree, such as California, Illinois, Massachusetts, and Virginia, probably could increase their sales tax revenue by more than one-third if they taxed household-related services comprehensively.

In addition to raising needed revenue, taxing services may reduce the year-to-year volatility of sales tax collections, the report explains, since purchases of some services do not vary as much as purchases of goods in response to changes in the economic cycle. Taxing services also would make the sales tax fairer. It is not equitable, for example, to tax the person who rents a videotape but not the person who watches a pay-per-view movie on cable TV.

Broadening Tax Base Can Help Preserve Public Services During Recession

The report examines which services states might tax and discusses the mechanics of imposing the tax. States largely avoid taxing services that generally only businesses purchase, like advertising and accounting; instead, to the extent they tax services, states target household services (like dry cleaning) or services that both households and businesses purchase (like landscaping). But the report notes that even if states forgo taxing services that are predominantly business-related, there is a vast array of services — the report lists more than 200 — they can bring into the sales tax base.

“State sales taxes are a major funding source for education, health care, public safety, and other key state and local responsibilities,” noted Mazerov. “Adding services to state sales tax bases can help states maintain those functions during difficult economic times. And it can avert other, less sound, tax increases that states otherwise might enact when they need new revenue.”