Nearly a dozen states this year are considering a “taxpayer’s bill of rights” (TABOR) modeled on Colorado’s severe limit on state taxes and expenditures.  TABOR proponents are claiming that Colorado’s strong economic performance during the 1990s demonstrates its economic benefits.  However, a new report from the Center on Budget and Policy Priorities shows that Colorado’s economic performance was due not to the state’s TABOR (adopted in 1992) but to more deeply rooted factors, such as many years of extensive public and private investment and high levels of educational attainment.

“Colorado’s economy had been growing faster than most other states long before it adopted TABOR,” said Nicholas Johnson, director of the Center’s State Fiscal Project and co-author of the report.  “The claim that TABOR explains Colorado’s prosperity in the 1990s — and that other states can boost their economies by adopting TABOR — isn’t based on fact.”

Last fall Coloradoans voted to suspend the state’s TABOR after several years of severe declines in public services.  Nevertheless, proponents are pushing TABOR measures (sometimes called “Stop OverSpending” or “SOS”) in numerous other states.  Such measures will be on the ballot in Maine, Ohio, and Oklahoma this year, and pro-TABOR campaigns are underway in at least eight other states (Arizona, Michigan, Missouri, Montana, Nevada, Oregon, Pennsylvania, and Wisconsin).  The new report cautions that promises of economic growth are likely to be oversold. 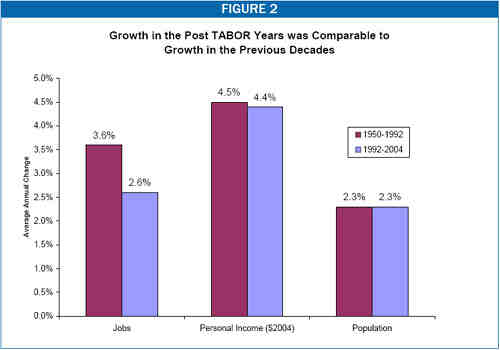 Colorado’s strong economy long predated TABOR.  Since World War II, Colorado has performed consistently above the national average in growth in jobs, personal income, and population.  In fact, the state’s job growth and personal income growth were somewhat greater before TABOR’s adoption than after it, while its population growth was the same in both periods.

A newly released study by two prominent economists in the area of state and local public finance finds “little support” for the notion that TABOR sparked Colorado’s economic growth in the 1990s.  The study, by Therese J. McGuire of Northwestern University’s Kellogg School of Management and Kim S. Rueben of the Urban Institute, used statistical analysis to control for factors other than TABOR that could affect economic growth.  Their analysis found that Colorado’s growth during the first decade under TABOR was roughly the same as what it would have been without TABOR.  (The study is available from the Economic Policy Institute at http://www.epi.org/content.cfm/bp172.)

What really drove Colorado’s economy in the 1990s, according to this and other studies, were the state’s booming high technology sector and highly educated workforce.  Those attributes result from a series of investments dating back to the 1940s, beginning with a sharp increase in federal defense spending during World War II and the Cold War for the construction of military bases, large research centers such as NORAD (the North American Aerospace Defense Command), and the Air Force Academy.  Large military contractors subsequently moved to Colorado as well.

Colorado’s military presence, in turn, boosted the state’s private-sector high-tech industry by attracting large numbers of scientists, engineers, and computer specialists.  Colorado’s research and technology sector continued to grow in the late 1970s and 1980s, thanks to the establishment of government space installations, the emergence of new research facilities, and the state’s expansion of its research universities.

Thus, when the U.S. high-tech sector took off during the 1990s, Colorado’s economy was primed to take advantage of it.  The state also benefited from the growth in travel and tourism during the decade because of its many recreational activities.  “Colorado would have prospered in the 1990s with or without TABOR,” noted Karen Lyons, co-author of the Center report.

Lessons for Other States

Not only has it failed to boost Colorado’s economy, but TABOR has harmed state services such as education and health care.  Under TABOR, Colorado declined from 35th to 49th in the nation in K-12 education spending as a percentage of personal income and from 23rd to 48th in the percentage of pregnant women receiving adequate access to prenatal care.  Also, the share of low-income children lacking health insurance has doubled in Colorado, even as it has fallen in the nation as a whole; Colorado now ranks worst among the 50 states on this measure.

These declines were caused by the formula at the heart of TABOR, which limits annual increases in state spending to the sum of the population growth rate and the inflation rate.  This formula does not accurately reflect a state’s costs of providing public services.  In November 2005, Coloradoans frustrated with their deteriorating public services and the prospect of making even more drastic cuts voted to suspend TABOR for five years.

Given TABOR’s problems in Colorado, proponents of similar measures in other states largely have stopped calling them “TABOR” and have taken pains to identify minor differences between Colorado’s TABOR and their proposals.  Yet these proposals contain the same core funding formula as Colorado’s TABOR; many of them share other harmful features with TABOR as well.  “A state that adopts a TABOR can reasonably expect to experience a decline in public-service funding that’s similar to Colorado’s,” said Iris Lav, the Center’s deputy director.