Amendment 3 will hinder Florida’s efforts to strengthen its economy if voters adopt it, according to a new report from the Center on Budget and Policy Priorities.

The measure, which the Florida Legislature placed on the ballot for this November, would impose rigid limits on state spending, forcing cuts to education, roads and highways, health care and other key services that support Florida’s economy and quality of life.

“Under Amendment 3, Floridians could expect parents being forced to shoulder the cost of books and supplies for their children, tuition hikes that put college out of reach for many hard-working students, and deterioration of roads, bridges, and ports,” said Erica Williams, policy analyst at the Center and co-author of the report. “That’s no way to develop the highly-skilled workforce and strong infrastructure Florida needs to compete economically.”

Amendment 3 is designed to defer its spending cuts for several years.  But once in effect, they would quickly become large and severe.  If the measure were to take full effect today rather than several years from now, the state would lose more than $11 billion in cumulative revenues in just 10 years, the report finds (see chart). 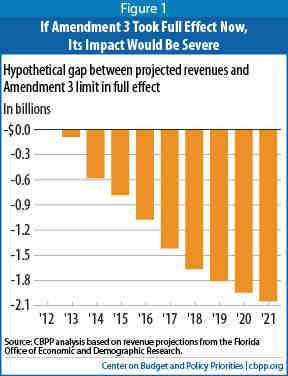 “The measure raises concerns about accountability, as most of the legislators who voted to put it on the ballot will no longer be in office when the cuts actually take full effect,” said Williams.

Colorado, the only state that has adopted such a measure (known there as TABOR), saw a serious deterioration in services prior to a successful effort by business and civic leaders to suspend it beginning in 2006.

“Florida already ranks at or near the bottom among states on a range of education and health coverage measures.  It’s dead last in providing health insurance coverage to low-income kids and in K-12 education spending as a share of the economy” said Williams. “If Amendment 3 passes, Florida likely will remain stuck at the bottom of national rankings as its performance on education, health care and other areas gets even worse.”

The full report, Florida’s Amendment 3 Would Cut Funds for Schools, Health Care, Roads, and Other Services, is available at https://www.cbpp.org/cms/index.cfm?fa=view&id=3831.