In 2012, Kansas adopted an array of tax cuts that were large, costly, and heavily titled to those high on the income scale.  Although proponents claimed these tax cuts would supercharge the state’s economy, Kansas’ job and economic growth lagged behind those of most neighboring states and the nation after the tax cuts took effect, and the deep revenue losses led to round after round of budget cuts in key programs.  This year, state lawmakers considered the damage, and they reversed course and repealed most of the tax cuts.[1]  Yet many policymakers in Washington are now proposing costly, regressive federal tax cuts that have a great deal in common with the tax cuts that performed so poorly in Kansas.[2]

Given the well-documented failure of the Kansas tax measures,[3] some lawmakers in Washington are trying to distance the “Big Six” tax plan that the Trump Administration and congressional Republican leaders announced in late September from the Kansas policies, despite the clear similarities.  For example, Rep. Lynn Jenkins (R-Kansas) has argued that Republicans have “learned from Kansas’ missteps.”[4]  Sharon Wagle, president of the Kansas State Senate, has claimed that “[c]omparing the 2012 Kansas tax plan to the ongoing tax reform discussions on the federal level is disingenuous.”

In 2012, Kansas tax-cut proponents helped sell the Kansas tax cuts with supply-side claims that by cutting taxes on high-income people and businesses, Kansas would spur exceptional growth by boosting work, saving, and investment.  Kansas Governor Sam Brownback promised the state tax cut would act “like a shot of adrenaline into the heart of the Kansas economy.”[5]  Tax-cut advocates Stephen Moore and Arthur Laffer, who helped design the Kansas plan, declared it would have a “near immediate” positive economic impact.

Although that’s far from what actually occurred,[6] this hasn’t stopped supply-side tax-cutters in the White House and on Capitol Hill from advancing a very similar tax-cut prescription for the federal government — and insisting that it will produce the type of robust growth they so confidently promised in Kansas.

The connection between the Kansas’ failed tax cuts and the GOP tax plan runs deep.  Stephen Moore — who, as noted, helped design the Kansas plan — now says the GOP tax plan is “not that much different from the one that Trump campaigned on — and that economist Larry Kudlow and I helped draft.”  Moore claims the GOP tax plan will produce the same type of results that he and his allies earlier insisted would occur in Kansas.  Reminiscent of the claim Kansas Governor Sam Brownback made in 2012 that the Kansas tax cuts would deliver a “shot of adrenaline” to the state’s economy, Moore now says the GOP tax plan will provide “a steroid injection for the U.S. economy.”  He contends that with these tax cuts, “we’ll see 3.5 to 4 percent growth” and “it will also generate nearly $2 trillion of added revenues”[7] — predictions that mainstream economists scoff at.

Trump Administration officials are also echoing these claims.  Council of Economic Advisers Chair Kevin Hassett contends that the GOP tax plan’s corporate rate cuts will cause large increases in typical workers’ wages[8] — a claim that leading economists have shown rests on assumptions they describe as “ludicrous.”[9]  Similarly, Treasury Secretary Steven Mnuchin says that the GOP tax plan will boost growth so much that it will reduce budget deficits by $1 trillion,[10] a claim no mainstream economist considers plausible.

In contrast, the non-partisan Tax Policy Center (TPC) expects “the framework to have little macroeconomic feedback effect on revenues over the first decade.”[11]  And Moody’s Analytics has concluded that the GOP tax plan “will not meaningfully improve economic growth, at least not on a sustained basis” and that the plan “would add significantly to future budget deficits and the nation’s debt load, even after accounting for any economic benefits.”[12]

States must balance their operating budgets each year.  The federal government, by contrast, can run deficits, which makes it easier for federal lawmakers to try to hide the tradeoffs that became clear in Kansas.  Kansas’ tax cuts caused revenues to plummet, leading to cuts to services, delays to road projects, and underfunded schools.  Federal lawmakers may try to obscure the threat these tax cuts would pose to important federal programs by adding the cost to deficits under standard budget estimates, while promising that the tax cuts will produce such strong economic growth that they will pay for themselves.  However, the added costs and swollen deficits that the tax cuts would produce likely would lead sooner or later to substantial budget cuts, harming many middle- and lower-income families.[17]

Both the President’s budget and the Republican budget plans now before Congress call for deep cuts in programs like Medicaid and education and justify them on the grounds that existing budget deficits are too large.  New tax cuts that further enlarge those deficits will only increase the threats to these and other programs.

In short, Kansas’ tax cuts are an important cautionary tale that federal policymakers ignore at their constituents’ peril.  The Kansas experience sends a clear warning that the nation’s policymakers should heed.

[4] Lynn Jenkins, “Tax reform in Washington and Kansas are not the same – we learned from Kansas’ mistakes and made it better,” Fox News, October 12, 2017, http://www.foxnews.com/opinion/2017/10/12/tax-reform-in-washington-and-kansas-are-not-same-learned-from-kansas-mistakes-and-made-it-better.html. 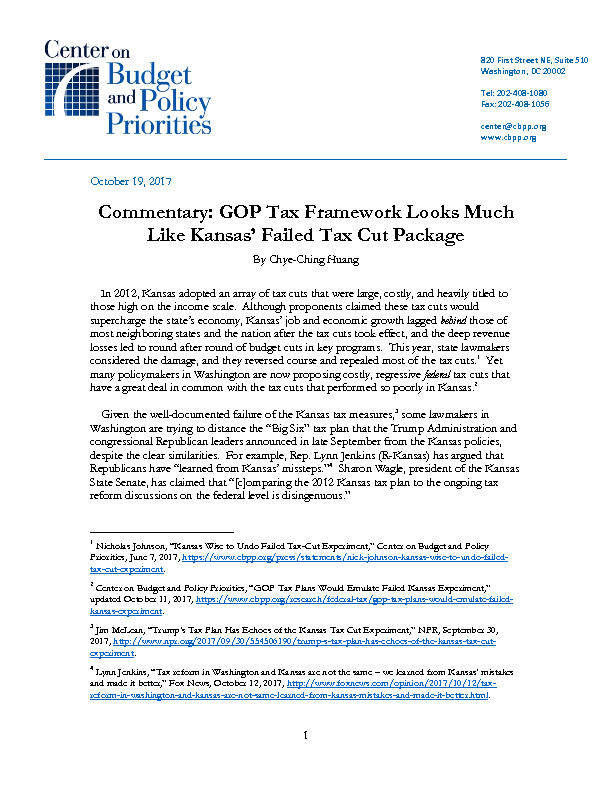