| By Paul N. Van de Water
The House this week will consider the “Save American Workers Act,” which would raise the threshold for full-time work under health reform from 30 to 40 hours a week.  As we have explained, however, this step would aggravate the very problem that the bill purports to solve — that health reform may lead to more part-time work. Health reform requires employers with at least 50 full-time-equivalent workers to offer coverage to full-time employees or pay a penalty.  Critics claim that employers are shifting some employees to part-time work to avoid offering them health insurance.  As the Wall Street Journal has reported, however, recent data provide scant evidence of such a shift.  And there’s every reason to expect the impact to be small as a share of total employment.
Image 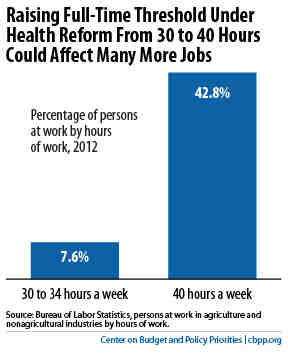 Raising the threshold from 30 to 40 hours would make a shift toward part-time employment much more likely — not less so.  Only about 8 percent of employees work 30 to 34 hours a week — that is, at or modestly above health reform’s 30-hour threshold.  But 43 percent of employees work 40 hours a week and thus would be vulnerable if the threshold rose to 40 hours (see chart). If you exclude workers at firms that already offer health insurance and thus won’t be tempted to cut workers’ hours, more than twice as many workers would face a high risk of reduced hours if the threshold rose to 40 hours, according to New York University economist Sherry Glied. The Congressional Budget Office (CBO) confirms that raising the threshold could put more workers at risk.  “Because many more workers work 40 hours per week (or slightly more) than work 30 hours per week (or slightly more),” CBO writes, raising the threshold “could affect many more workers than are affected under current laws.” Equally or more important, CBO finds that the House bill would increase budget deficits by $74 billion over ten years (as fewer employers would pay penalties for not offering coverage) and leave more people uninsured. Health reform’s critics are touting reports that some school districts have limited or reduced employees’ hours in response to health reform.  Nevertheless, the National Education Association (NEA) opposes the bill.  Some employers have overreacted because they don’t fully understand the employer responsibility requirement, the NEA finds, and others have simply used the requirement as an excuse to cut hours.  The bill would do nothing to resolve these issues.

Senior Fellow
Share
Facebook Twitter Print Email
PreviousWhy the New Ryan Budget Will Likely Be at Least as Extreme as Last Year’s
NextRyan Budget Again Proposes a Medicaid Block Grant, Adding Millions to the Ranks of the Uninsured and Underinsured
Stay up to date
Receive the latest news and reports from the Center