Who’s to Blame for the Slow Economy?

Just a reminder to all who, like Henninger, parrot the shibboleth that stimulus did not work: the Congressional Budget Office finds that GDP has been higher each year since 2009 than it would have been without the 2009 American Recovery and Reinvestment Act (ARRA) and unemployment has been lower (see chart). 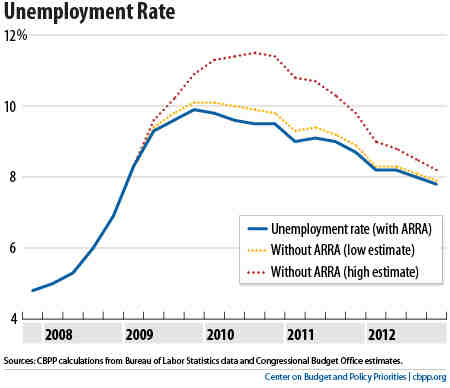 CBO includes a broad range of estimates about ARRA’s impact to encompass the views of economists who continue to doubt the mounting evidence that stimulus is highly effective under the economic conditions prevailing in recent years.  But, that evidence suggests that ARRA’s impact is quite likely much nearer the high than the low estimate. . . .

The powerful effects of fiscal policy in today’s special circumstances work both ways.  The economic forecasting firm Macroeconomic Advisers estimates that the economic uncertainty and policy choices to raise taxes and cut spending that we’ve made since 2010 have cost the economy up to a percentage point per year of slower economic growth and up to 2 million jobs.

It’s Republicans whose policy preferences have pulled policy toward greater near-term fiscal austerity through spending cuts; Democratic plans look more like bipartisan proposals for less spending restraint in the short term and more deficit reduction that’s balanced between revenues and spending down the road when the economy is stronger.