While Deficit Cutting, Keep the Goal of Shared Prosperity in Mind

Following up on yesterday’s post on Robert Greenstein’s Senate Budget Committee testimony on tax reform and deficit reduction, here’s another one:  in the excerpt below, Greenstein explains why deficit-reduction initiatives should protect the most vulnerable Americans and avoid worsening inequality:

As we work to address the nation’s fiscal challenges, we should keep in mind a key economic development of recent decades.  Since the mid-1970s, as a result of various factors (mostly unrelated to government policy), the benefits of economic growth have not been shared in the way they used to be.  Between 1976 and 2007, the U.S. gross domestic product (GDP) grew 66 percent per person, adjusted for inflation.  But the average income for the top 1 percent of Americans increased by 280 percent, in inflation-adjusted terms, while the average income of the bottom 90 percent of Americans stagnated, growing just 8 percent over this 30-year period [see graph].
Image 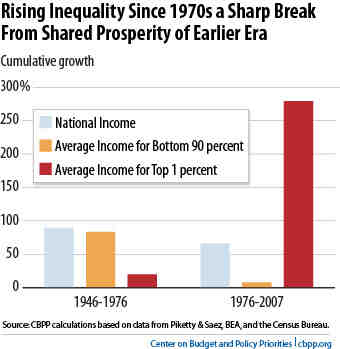 The economist Kenneth Rogoff recently warned of the consequences of widening and historic inequalities of income, wealth, and opportunity.  Rogoff cautioned that the ability of countries to create opportunities for their citizens and to address inequality could be the key factor that “could separate the winners and losers in the next round of globalization” and could emerge as the “big wildcard in the next decade of global growth.” Public policy in general and tax policy in particular have a role in helping to mitigate the human consequences of the global trends that have played a large role in suppressing wage growth among lower- and middle-class Americans.  Unfortunately, our country’s recent record on this matter has not been stellar.  For example, under the tax cuts enacted in 2001 and 2003, people making over $1 million a year are receiving an average tax cut of more than $125,000 a year, according to the Urban Institute-Brookings Tax Policy Center.  This is more than 140 times the average tax cut that households in the middle 20 percent of the income scale are receiving. The Bowles-Simpson report set forth a basic principle here, stating that “Though reducing the deficit will require shared sacrifice, those of us who are best off will need to contribute the most.  Tax reform must continue to protect those who are most vulnerable and eliminate tax loopholes favoring those who need help least.”