What About the Jobs Deficit?

Members of Congress who are opposing the pending jobs legislation on the grounds that it isn’t fully paid for and will increase the current deficit are focusing on the wrong deficit.  Yes, we have a long-term budget deficit that we need to take very seriously.  But the current deficit to worry about right now is the jobs deficit.

Despite encouraging signs of revival in the job market, we are still down almost 8 million jobs from where we were at the start of the recession in December 2007.  And, of course, population growth since then has expanded the potential labor force and hence the number of jobs we need to create to restore full employment. 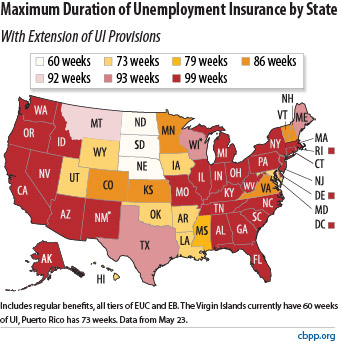 (For an explanation of the different types of unemployment insurance expansions cited in the maps, see here.)

Letting these benefits expire wouldn’t just impose unnecessary hardship and uncertainty on the unemployed.  It would also slow the recovery by depriving the economy of a needed boost that would encourage stronger job creation.  As my colleague Paul Van de Water and I have argued, this is too high a price to pay to avoid the very small long-term deficit impact from passing the full jobs bill.

Share
Facebook Twitter Print Email
Previous2.8 Million More Reasons to Like the Recovery Act
NextCongressional Failure on State Aid Would Carry Heavy Cost
Stay up to date
Receive the latest news and reports from the Center