Our last post explained that SNAP enrollment is still high because the job market is still weak.  Here’s another reason why the need for SNAP remains high:  while the number of unemployed workers has fallen since 2010, the number who receive no state or federal unemployment insurance (UI) benefits has risen and is higher now than at the depths of the recession (see graph).  These jobless workers are the most likely to qualify for SNAP because they have neither wages nor UI benefits. 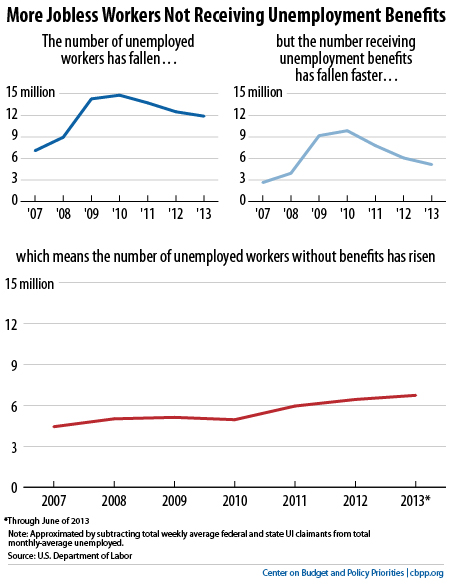 As our new paper explains:

In addition, the duration of federal UI benefits (which go to long-term unemployed workers) has fallen.  This reflects several factors.  One is the decline in the official unemployment rate in many states, which itself leads to automatic reductions in the number of weeks of federal Emergency Unemployment Compensation benefits available in those states.

Another factor is federal changes implemented in 2012 in the number of weeks of federal UI benefits provided irrespective of improvements in economic conditions.

A third factor is the disappearance from every state except Alaska of another source of long-term UI benefits, the federal Extended Benefits program (which is designed to “trigger on” automatically when a state’s unemployment rate is rising rapidly, but under the same formula, ceases to remain available once unemployment stops rising even if the state continues to experience a long period of severely elevated unemployment).


As our paper explains, if the job market improves, SNAP enrollment and costs should come down.  In fact, the Congressional Budget Office (CBO) projects that as the labor market recovers, SNAP costs will decline markedly.  CBO projects that by 2019, SNAP costs will fall all of the way back to their mid-1990s level, measured as a share of the economy.

The Safety Net: Lifting Millions Out of Poverty