While the study’s findings are extremely troubling, they also show that SNAP (the Supplemental Nutrition Assistance Program, formerly the Food Stamp Program) is a powerful antidote to extreme poverty. 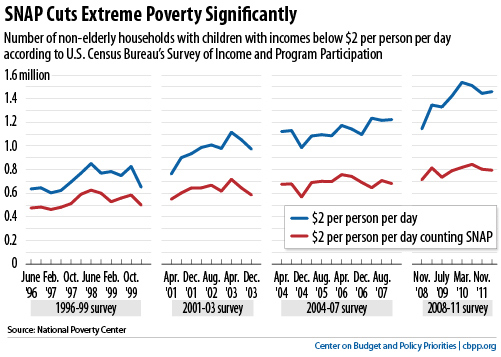 SNAP’s beneficial effects were especially notable after policymakers expanded the program in the 2009 Recovery Act.  As the graph shows, the number of extremely poor households shot up between late 2008 and early 2011, but if you count SNAP benefits, it remained virtually unchanged.

Other studies have also documented SNAP’s powerful poverty-fighting impact.  According to the Census Bureau’s Supplemental Poverty Measure, which counts SNAP as income, SNAP kept more than 5 million people out of poverty in 2010.  SNAP also lessens the severity of poverty for millions of others; if SNAP is counted as income, it lifted 2.5 million children above 75 percent of the poverty line in 2005, more than any other program.

Another reason for SNAP’s effectiveness is that, unlike cash assistance, it is broadly available to almost all households with low incomes.  SNAP eligibility rules and benefit levels are, for the most part, uniform across the nation.  And, SNAP is structured as an entitlement, which means that anyone who qualifies under program rules can receive benefits.

SNAP alone, of course, cannot cure extreme poverty or the hardships to which it contributes.   Even with the help that SNAP provides, the Agriculture Department estimates that some 2.2 million households with children suffered from hunger at some point in 2010.  But SNAP is doing much to ameliorate these terrible problems.

December 19, 2011
PreviousIncomes Bouncing Back at the Top
NextEven in a Down Year, Top 1% Had More Total Income than Bottom 50%
Stay up to date
Receive the latest news and reports from the Center