The Congressional Budget Office (CBO) released its latest estimates of the distribution of household income and federal taxes last week, updated to include 2008 and 2009 data. The report confirms that the financial crisis and recession took a toll on household incomes, especially at the very top (see chart).  But it also confirms that income at the top has grown increasingly concentrated over the past 30 years, as income growth for the top 1 percent has substantially outpaced income growth for the rest of the distribution.

An earlier report from Berkeley economist Emmanuel Saez foreshadowed CBO’s findings. Together with fellow economist Thomas Piketty, Saez has produced statistics on the concentration of before-tax income from 1913 to 2010 using tax return data. (CBO uses a combination of IRS and Census data and a more comprehensive definition of income, which includes non-taxable government benefits like SNAP — formerly known as food stamps — and non-taxable employer-provided fringe benefits.)  Like the CBO data, the Piketty-Saez data show a temporary drop in concentration at the top in the dot-com collapse and recession in 2000-01, followed by a strong rebound to a new higher peak just prior to the financial crisis and Great Recession (see chart below).

But the Piketty-Saez data extend a year beyond CBO’s and they show a rise in concentration at the top in 2010, as the incomes of the top 1 percent rebounded much faster than others.  CBO has not yet produced 2010 data, but in its new report, it points to other data suggesting a disproportionate rebound in incomes at the top between 2009 and 2010. 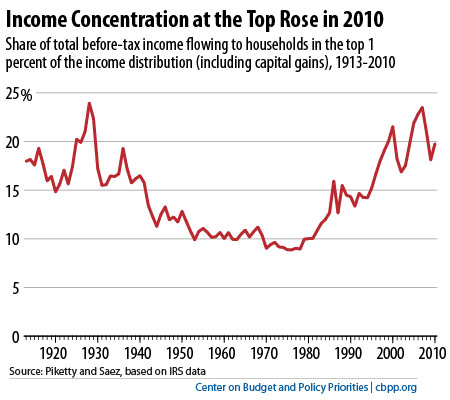 In this report, CBO introduced some important changes in the way it values government-provided health insurance in its measurement of household income and in its treatment of the incidence of the corporate income tax between capital and labor.  It also changed the way it adjusts for inflation.

We’re studying those changes and will be issuing further analyses, as well as updating our guide to statistics on income inequality.

Income Growth at the Top Mostly Occurring at the Tippy-Top

Even in a Down Year, Top 1% Had More Total Income than Bottom 50%

Arrow to the Heart of Inequality

December 1, 2011
PreviousThe Latest Effort to Undo Health Reform
NextEITC Even Better for Children than We Thought
Stay up to date
Receive the latest news and reports from the Center