| By Chad Stone
Today’s solid jobs report shows a labor market that is moving in the right direction but still has a ways to go before everyone who would like to be working has a reasonable chance of finding a suitable job.  In particular, Congress dealt the long-term unemployed a harsh blow when it allowed federal emergency jobless benefits to expire prematurely at the end of last year.  Seven months later, long-term unemployment remains higher than when any of the previous seven emergency unemployment programs expired after previous recessions.  In addition, the share of the population with a job remains well below where it was at the start of the recession. Click here for my full statement with further analysis.
Image 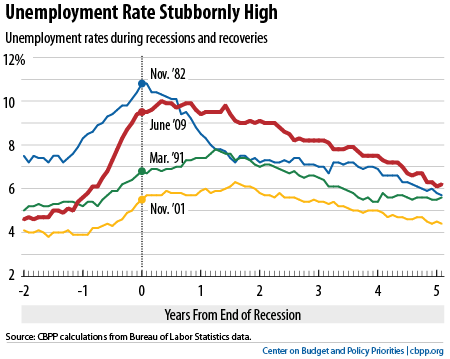