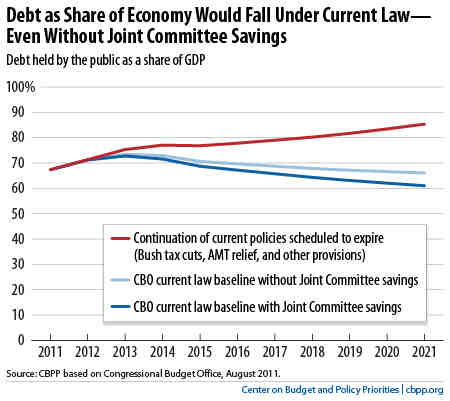 UPDATE, August 26: we’ve revised the graph. In fact, the CBO projections show that we can stabilize the debt-to-GDP ratio — a key test of fiscal sustainability — even without the second phase of cuts in the Budget Control Act. The legislation calls for $840 billion in funding cuts in discretionary (non-entitlement) programs over the next decade and assigns a Joint Select Committee to come up with at least $1.2 trillion in additional savings.  But even without those $1.2 trillion in savings, we’d reduce the debt-to-GDP ratio from today’s 67 percent to 66 percent by 2021 (see graph). What’s the catch?  Policymakers would have to follow other laws that are on the books.  That’d mean letting tax cuts (chiefly President Bush’s tax cuts, which are slated to lapse in 2013) expire on schedule, allowing the Alternative Minimum Tax (AMT) to expand its reach, and going ahead with scheduled cuts in Medicare reimbursements to physicians.  Or — more realistically — it means paying for any measures that Congress enacts after this year to extend current policies in these areas. The course is clear:  at least for the next decade, policymakers don’t need to pass new laws to curb the deficit; they can follow the laws they’ve already enacted.
Topics:
Federal Budget, Budget Outlook, Budget Process, Economy
PreviousTANF at 15, Part III: What Is TANF’s Record of Success?
NextAnother Reason Not to Raise the Age of Eligibility for Medicare
Stay up to date
Receive the latest news and reports from the Center