Timely Reminder of the Perils of Another Corporate Tax Holiday

Over the last decade, U.S. multinationals have dramatically reduced their American workforces while expanding their overseas workforces, the Washington Post reports today.  While the federal government publishes these data in the aggregate (see graph), many individual firms don’t publicly disclose their number of U.S. versus foreign workers, and some of them are among the firms lobbying Congress for a new round of tax amnesty on their growing foreign profits.
Image 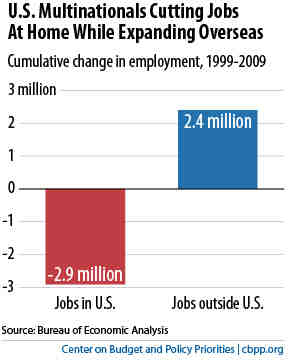 Members of Congress should keep this graph in mind as they consider another tax holiday, which would only sweeten the pot for corporations looking to shift income and investments overseas.  Instead of paying the regular 35 percent corporate rate applied to domestic investments, corporations would receive a bargain-basement rate of just 5 percent on their foreign profits. The message to multinationals would be clear:  they can invest massively overseas and then, through periodic tax holidays, repatriate the resulting profits at extremely low tax rates.  This would give them even more incentive to move more investment and jobs overseas, as it appears they have been doing since 1999. As we’ve explained in detail, the 2004 tax amnesty failed to produce the promised economic benefits, and repeating it would be an even bigger mistake.
Topics:
Federal Budget, Federal Tax, Budget Outlook, Business Taxes, Economy
PreviousBudget Cuts No Longer “Abstract”
NextAlarmist Stories Misportray Social Security Disability Insurance
Stay up to date
Receive the latest news and reports from the Center