Do you think middle-income Americans are overtaxed?  By at least one standard — the standard of history — the answer is no, as our new paper explains. In fact, federal taxes on middle-income Americans are near historic lows, and that’s true whether you’re talking about federal income taxes or all federal taxes, according to the latest available data.
Image 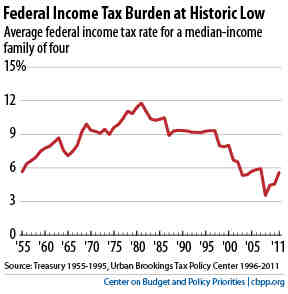 When it comes to income taxes, a family of four in the exact middle of the income spectrum will pay 5.6 percent of its 2011 income in federal income taxes, according to new estimates from the Urban Institute-Brookings Institution Tax Policy Center.  Federal income taxes on middle-income families have fallen significantly in recent decades, and they have been lower under Presidents George W. Bush and Obama than at any time since the 1950s. When it comes to overall federal taxes, households in the middle fifth of the income spectrum paid an average 14.3 percent of their income in taxes in 2007, the last year for which we have data, according to the Congressional Budget Office (CBO).   That’s just a bit above the 13.8 percent of 2003, the lowest level in data that dates back to 1979.   The 14.3 percent figure will likely fall as CBO gathers data for more recent years, due to the effects of the Make Work Pay tax credit in 2009 and 2010, the payroll tax cut in 2011 and 2012, and a weak economy that reduced many families’ incomes. The United States remains a low-tax country by international standards as well, collecting less in combined federal and state taxes than nearly any other developed country.
Image