A House Budget Committee hearing today is looking at how anti-poverty programs have worked over the last 50 years.  As I explained yesterday, safety net programs lifted 40 million people — including almost 9 million children — out of poverty in 2011, according to the Census Bureau’s Supplemental Poverty Measure.  Today, we’ll look at how these programs promote work and support millions of low-income working families. Efforts to reduce poverty over the past three decades, have shifted so that programs like SNAP (Supplemental Nutrition Assistance Program, formerly food stamps), the Earned Income Tax Credit (EITC), Child Tax Credit (CTC), and Medicaid now do much more to promote work and support low-income working families whose earnings aren’t high enough to make ends meet, as our new paper explains:

Thirty years ago, the main assistance programs for families with children were the Aid to Families with Dependent Children (AFDC) program, Medicaid, food stamps, and a very small EITC.  AFDC provided assistance largely to single mothers during periods of joblessness; if a mother earned too much to qualify, she would lose not only income assistance but also Medicaid.  Medicaid generally covered only parents and their children as well as elderly and disabled people who received cash welfare benefits; the working poor did not qualify.  Far fewer households with children that received food stamps were working.  The EITC did little more than offset some of the payroll taxes that working poor families owed. 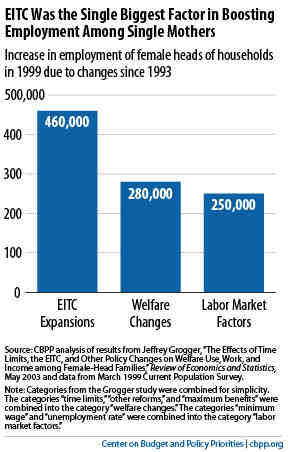 To be sure, not all the changes have been positive.  In fact, the safety net has weakened over time for the very poorest families with children, and poverty remains high, particularly compared to other wealthy nations.  We’ll be back with more about that in a future post. Click here to read our new paper and here and here for 50-state data on the number of people that public programs lifted out of poverty in 2009-2011.
Related Posts:
Topics:
Child Nutrition and WIC, Federal Tax, Food Assistance, Poverty and Inequality, Family Income Support, Working Family Tax Credits, Medicaid and CHIP, Health
PreviousObama Proposal a Clear Step Forward, But Would Be Better with More Revenue
NextStates Taking the Lead in Making Work Supports More Efficient
Stay up to date
Receive the latest news and reports from the Center